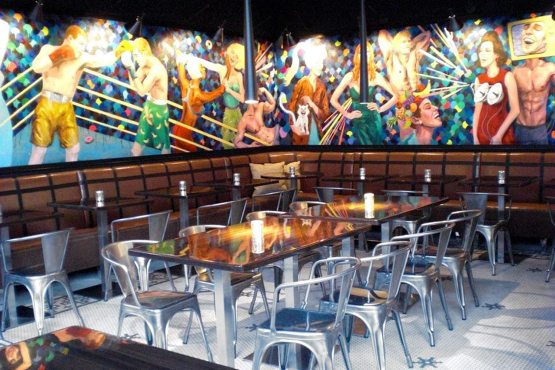 We all have those late nights.  Whether it is hanging out with your friends at a great party until the end of the evening, or cramming for that upcoming final that we have, us Manhattanites know what it feels like to pull an all nighter in so many kinds of ways.  Luckily, there is a great restaurant you can go to that will ease your hangover or that last minute cram session with tasty treats and yummy drinks.  This of course, is Pounds and Ounces, located in the heart of Chelsea in New York City.  Since opening two years ago, P&O has earned the coveted title of neighborhood favorite thanks to its innovative cuisine, captivating cocktails, hip music and one of the liveliest ambiances in all of Chelsea.

The bar also rocks the night away with a special cocktail menu of boozy, adults only ice cream shakes like the No.1 with chocolate ice cream, bourbon, whipped cream and chocolate sauce; the No. 2 with vanilla ice cream blended with Baileys, Frangelico and butterscotch sauce and the No. 4 with vanilla ice cream, Pinnacle Strawberry Shortcake vodka and whipped cream.  And for those with fortitude and a sweet tooth, the house signature “Jacked” Banana Split featuring banana bread, your choice of ice cream, candy crusted and chocolate-dipped banana lollipops and a ton of whip cream is a gut-busting must!

I was lucky enough to try out the new menu with a friend of mine the other night, and needless to say- they do not disappoint.  We opted for two tasty appetizers on the late night menu- the mac and cheese with bacon on top (Bacon is life people) and the super delicious Tuna Tartare.  Both of them had sharp contrasts in tastes and textures, one of course being hot and the other one on the cold side, but both had an insane amount of flavor and kept our stomachs satisfied until the next course.

Moving onto the entree portion of the meal, my friend and I kept within the same speed of going after different types of foods that are designed for this kind of menu.  He went more on a brunch side with their Steak and Eggs, and I chose one of my favorite sandwiches in the world, the Reuben.  The steak was cooked perfectly and blended really well with the scrambled eggs that they provided.  The Reuben was chock full of yumminess, packed with a ton of corned beef and thousand island dressing which were just delicious.  The fries that came with both meals were tasty and salted to perfection.  We each finished off with two of their boozy ice cream shakes, I took the number two (not literally people), and he took the number four as listed above.  Both were creamy and great, but could’ve been a little more on the thicker side in my honest opinion.  Overall I would give this menu a 9 out of 10 for taste, 8 out of 10 for creativity, and 10 out of 10 for customer service and ambiance.

Definitely stop by Pounds and Ounces no matter what time of day it is.  You surely won’t be disappointed while you are there.  Check out the website for more information.  Happy Eating!