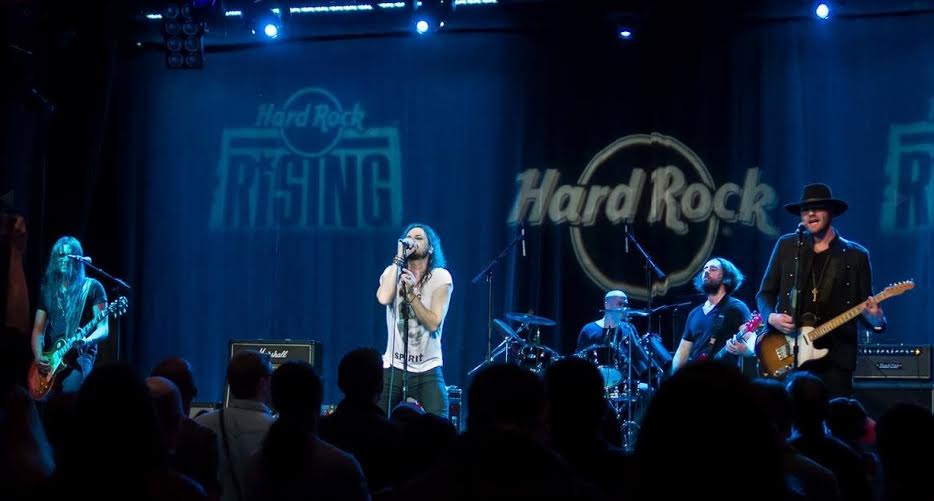 Need some fun plans for St. Patrick’s Day tomorrow in NYC?  Love a combination of a great arena, awesome music, food and drink all in one?  Why not try out the Hard Rock Cafe in Times Square tomorrow night, as they will be hosting their annual Battle Of The Bands Concert.  The event, which happens to be free to the public, will open its doors at 6PM Eastern time tomorrow with the event starting at 7PM.  Four local bands will compete for a chance to win a cash prize of $1,000 and be up for consideration to travel to Barcelona to play on the main stage at the first-ever Hard Rock Rising Barcelona Global Music Festival.

Hard Rock Cafe New York will host a battle event where local bands The Danbees from Brooklyn, N.Y., Sunill Nareign from Bronx, N.Y., Running Late from Madison, N.J. and Pool Cosby from Brooklyn, N.Y. will be judged by a panel of local industry experts including Frank Bello, the high energy, always-rocking bassist of New York thrash metal icons Anthrax; Dick Manitoba, American punk rock singer and radio personality, best known as the lead singer of the New York City band The Dictators; and more! The judges panel will select one band to represent Hard Rock Cafe New York as they move on to compete against other winners from Hard Rock locations around the world.

Once the local New York winning band is chosen, a panel of international music industry professionals will then review all city winners to determine the regional winners. Each of the regional winners will receive an all-expenses paid trip to Barcelona, Spain to perform at Hard Rock Cafe Barcelona for the final live battle event. The overall winner will perform on the main stage at the Hard Rock Rising Barcelona global music festival!

Hard Rock Rising Barcelona will take place on Friday, July 24 and Saturday, July 25, 2015, in Barcelona, Spain in front of 60,000 fans, featuring a lineup of international talent performing against the backdrop of the beach at El Forum. This unique and cultural music event gives music lovers the opportunity to witness the first-ever Hard Rock Rising Barcelona global music festival and enjoy some of the hottest and most recognized names in music.

For more information on The Hard Rock Cafe in Times Square, check out their official site.  Should be a fun night for all!