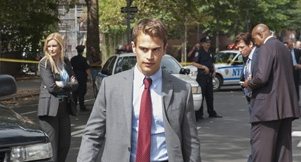 Last night, CBS, the network that brought you 3 CSI’s, 2 NCIS’s, Hawaii Five O, Blue Bloods, and numerous other cop shows over the past decade unveiled the newest in their never ending assembly line of shows about people investigating murders and drug dealers in Golden Boy.

Golden Boy tells the story of Walter William Clark Jr. (Theo James), as he makes his meteoric rise from beat cop to the the youngest Police Commissioner of New York City. After a short three years on the job, his on the job heroics led him to a promotion to the homicide squad. While there he’s paired up with a Don Owen, whom is a veteran detective closing in on retirement (Chi McBride). While solving murders, he’s dealing with equally ambitious and underhanded rival cop Christian Arroyo (Kevin Alejandro).

Plot wise, the show seems to be pretty contrived, but the fact that the entire show is told from the perspective of Clark makes this perfectly acceptable, since I would expect that a character of that ilk would try to present himself in the best possible light to a newspaper reporter (Richard Kind). It seems pretty solidly written, giving a show a little more pop than your standard issue crime procedural, even if it tends to over-rely on jargon during the shows numerous action scenes.

There’s one glaring problem with Clark is that even as commissioner, he comes obnoxious and entirely unlikeable, even when he’s trying to console a victims family. This brusqueness is even more apparent when Clark plays his younger self, as he slaughters the fourth amendment and performs a sick revenge fantasy all within the span of our premiere 60 minutes. In a semi related quibble, this may be the New Yorker in me, but why does every cop in Golden Boy‘s NYPD sound like they’re from Boston?

Chi McBride on the other hand, is excellent as grizzled veteran Owen. He plays the grizzled veteran actually trying to teach the young upstart Clark. Owen seems to be the moral center of a show that seems to angle itself long-term into the story of a rivalry between Clark and Arroyo. Kevin Alejandro plays an excellent smug snake as Arroyo, though it’s difficult to differentiate him from Clark at times because of how smugly Theo James plays Walter Clark.

The cinematography is interesting, and generally strong with its heavy use of time lapse photography. They also take advantage of some unique shots, like a spring to life shot in the opening scene to create a sense of urgency unlike any other I’ve seen in a TV show to this point. One minor quibble in this area, is that every window has this weird glow to it that makes it seem like the characters are staring at TV’s every time they look out the window.

Final Verdict: Golden Boy is serviceable as both a political drama and a cop show, even if it tends to be a little pedestrian at times. I think that the pilot should have at least made Clark as commissioner a little more likable, as quite frankly, I struggle to see why I would recommend a story about the rise of such an unsympathetic protagonist. This might be worth checking into later to see if James can hit the soft notes as Clark, but unless you happen to be watching the NCIS smorgasbord lead-in, I can’t see going out of your way to catch this.