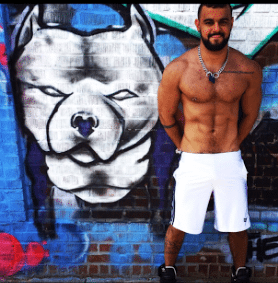 As someone who has interviewed many different types of entertainers in the past four or so years, I have rarely been nervous outside of meeting Jay-Z and working the MTV Video Music Awards Red Carpet (the only carpet I will ever work.  Giggity).  Yet when I met up with burgeoning adult film star Tony Orion, I was quite the bit nervous.  Why?  Because he is super handsome and cute and I think that would make any gay man nervous.  Tony Orion has made quite the name for himself in the adult industry in a very short period of time, and has been able to transition himself as one of the top performers of 2014.  Working with the biggest studios in the industry such as Titan, Raging Stallion and Colt, Tony has established himself as one to lookout for and in doing so is the reason why I wanted to sit down with this beautiful lad before he got to big to chat with the cute cub from Long Island.

I recently chatted with the Brazilian stud, who recently moved from Chicago to New York City and now back to Chicago again about his beginnings in the industry, his freshening take on men of color & barebacking, and what he sees for himself both in and outside of it.  Take a look.

So you are a guy that was born in Brazil, made your way to Chicago and then New York City.  With all this geographical change, what made you want to get involved in the industry?

It was actually my ex boyfriend who got me into this while I was in Chicago.  We met last year and he was already in the industry, doing modeling and working at that point for a studio called Fort Troff.  While we were dating he asked me a bunch of times if I wanted to do movies, which was something that I never thought about doing at that point.  I liked being behind the camera, but I wasn’t sure if I wanted to actually be in front of it.  So there actually became an opportunity for Fort Troff where his original scene partner didn’t show up and there was a vacancy which he then asked me to join him in.   We did the scene and it turned out to be a lot more fun than I thought it was going to be mainly because it came so natural as it was with the guy I was dating at that point, which made it that much more fun.

We came back home, and I came to the conclusion that this is something I want to further myself in.  So then I started sending applications to companies like Titan Men, Raging Stallion & Colt to name a few as I feel I represent those types of men.  Got callbacks and that is where everything started.  Within the first week I did two shoots for Raging Stallion and one for Titan Men, it was that quick.  I actually did a scene with Alessio Romero who turned out to be a good friend of mine in the long run.

During that point you were a Rentboy.  A lot of guys that I interviewed have had their own opinions on their experiences while doing that, did you like yours?

Honestly, no.  I mainly did it as it was something my ex boyfriend did so I felt it was good to have a healthy balance and do it with him.  After we broke up I came to the decision that it wasn’t something I wanted to do anymore and that was it.  It was more of a comfort level for me while I did it.  Don’t get me wrong, I got to meet a lot of nice and interesting people throughout, got to travel, see new places and network but ultimately it wasn’t really my thing.  Right now I am just keeping my porn work active and it is doing very well for me, and it is something I am enjoying very much. It is something that when you get into it you have to enjoy it, and down the line you have a great story to tell for someone to share it with.

A big issue in the industry is that men of color aren’t treated on the same well as white man are, especially in the big studios.  What is your take on this?

I think its more about your personality, how you portray yourself, how you deal with people and ultimately leave an impression with them.  I am learning lately that everyone has a different personality all around, and for me I go where I fit.  If I get into a situation where I don’t feel comfortable or welcomed I am not going to try hard to fit in.  It is not who I am.  In the industry, there is a fit for everyone.  For instance,  I’m not Hot House type, but recently I worked with them for a fetish movie.  Why?  Because I have hair and a beard but their type is usually lean, American men with very clean features.  That is usually their type of men.  So I am not going to say never because it worked, but the boys with that type of body typically have more work.  That being said, it isn’t always about your body features, so I don’t think the question you asked really rings true in that setting.

You’ve done many great scenes in a short time frame, do you have a favorite?

Oh yeah.  It was this Colt scene with Dirk Caber.  I know Dirk way before I did porn because he used to live in Chicago before he moved to Boston.  We became very close and good friends, so when I went to do the scene with him in San Francisco for Colt the chemistry was already there and it made everything go by that much faster.  We were actually able to finish it in under an hour, so for me it was super hot not only because of the chemistry but because of how the director noticed that and complimented it.  It is always nice when the director simply says, “Nice Job”, it was one of the best feelings ever when that happens and that is really what the experience was with Dirk.  The cherry on top was right after the director tweeted, “Just directed the best scene of my life”.   Totally awesome.

Is there a particular scene partner you would like to work with upcoming that you haven’t had yet?

I do actually.  Adam Killian is super hot and nice.  I saw him at The Grabby’s in Chicago this year and thinks he is flawless in the way he looks and talks.  I would love to work with Francois Sagat.  I know he doesn’t perform anymore but directs for Titan and his projects are so awesome.  The ideas he puts in the project and transforms them into being so sexually hot is mind blowing.  He did this one move for Titan called “Incubus” that he was part of visually directing.  He brought a ton of ideas to it and it was so different from what the norm is but it was so hot, like the kind of sex that people read about but never actually see on screen.  It was so easy to get off on it.

Outside of the industry what do you hope to accomplish?

I have a very creative mind and am taking classes for fashion at FIT.  I like fashion very much and like to put my creativity into things like the shirt I am wearing right now.  Everytime I have something that pops in my mind, I draw it.  Most of the time I enjoy the final things that I do, and it makes me happy and thinks that it can be something that can be sold to the masses so that is something that i am working on now.  I also gogo dance a lot, as well as a ton of other projects going on outside of porn that is in the works.  When you have to accomplish something that is very yours, you have to be patient.  It is not going to come easy.  I just moved to New York City in March, and I am not in a rush and going with the flow and seeing what happens.  There are millions of people who work here to get to where they are, that to me I just want to be part of this big mess of a crowd that are trying to find their goals.

Want to know more about Tony Orion?  Catch up with him on his social networking pages for more info!