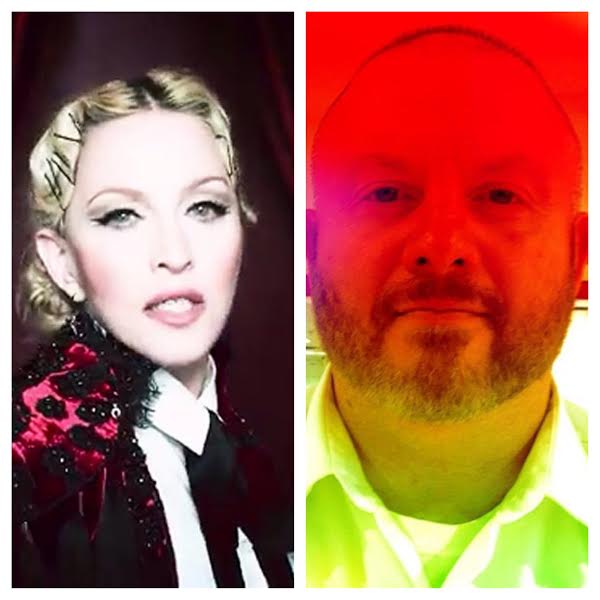 Two people I happen to be big fans of are living legend and queen of the too tight cape Madonna, as well as producer, songwriter and all around good guy Paul Andrews.  Long Island and frequent NYC’er Paul is someone that I profiled recently for the site, and in that original interview you really get to understand just how truly talented this guy is.  With 2014 being such a lackluster year in music, in particular sales wise, some of the biggest artists in the world have their albums slated to be released this year in hopes that we can salvage what 2014 didn’t give.  Madonna of course is one of them, as her highly anticipated new album “Rebel Heart” is slated to be released this coming Tuesday.

One of the songs off of that album is called “Living For Love” which is a simple piano based song.  However Paul remixed the song with a more uptempo base, and it sounds freaking fantastic.  Take a listen to the track here.  Madonna songs have been remixed for almost 30 years, yet I love how Paul took a simple, low key song and really lifted it to a whole other level with a great synth-base that elevates it to a whole other level.  He truly shows what a chameleon he is when it comes to mixing songs, and this is a great example of that.

On the page for “Living For Love”, he has this to say about the remix-

Madonna is a hard worker.  How could anyone not respect that!  She’s still delivering.  This is my 4th Madonna remix.  Decided to go with a 90’s sounding house style feel for a few reasons:

The original version of “Living For Love” is piano based.

There seems to be a trend with mixes going back to the 90’s style.

I got a new virtual synth and I HAD to use it!

When I first heard “Living For Love”, I wondered why the song built up in the chorus just to drop out.  The chorus sounds like a gospel song, so why not “go there”.  Interestingly, the song seems to have so many different parts to it, so I decided to re-harmonize each section on its own.

I’m saddened to hear that some radio stations aren’t playing Madonna because she doesn’t appeal to their younger listening audience.  As with most pop stations, they play into the marketing.  Would they play this song if a younger artist sang it?  I honestly do not listen to pop radio.  They have stopped playing the music I like a long time ago.

The latter part of what he said could not be more true.  Madonna puts out better music than most of the 1dkatypladygagabieber crap that is out there today.  So does Paul.  For more information on this mix and everything else Paul does, check out his official site.