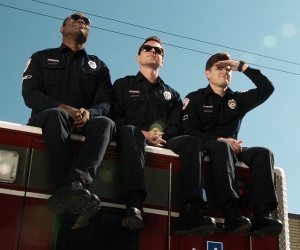 Sirens: Thursdays at 10 Eastern on USA

2013 was an odd year for USA. While the network had spent years building it’s brand of “characters welcome”, it had instead spent the year launching a handful of mediocre reality series (The Moment, Summer Camp) to flank it’s more established shows. Going into 2014, USA seems to be aiming for a more balanced mix of new scripted and new reality, and is trusting some proven hands in order to find the right hits to replace some of its’ aging lineup.

Sirens, from the minds of Denis Leary and Bob Fisher, is the story of three EMT’s in the Chicago area as they go on calls trying to save the lives of the people who call on them. Two of the EMT’s, Hank (Kevin Daniels) and Johnny (Michael Mosely), are long time friends, but they are also tasked with helping to show neophyte Brian (Kevin Bigley) the ropes. Further complicating matters is their constant interactions with Johnny’s ex-girlfriend Theresa (Jessica MacNamee), a hard nosed cop still holding some feelings for Johnny.

Sirens aims to be the medical equivalent of the buddy cop show, and succeeds at it perfectly. Johnny and Hank have a dynamic that’s reminiscent of Riggs and Murtaugh, with the loose cannon Johnny being tempered by the more reserved Hank. Where Sirens deviates is in the addition of Brian, who operates as a naive counterpoint to their cynicism and as the sort of hate sink that happens to keep Johnny and Hank from eating each other alive with their comedic barbs. In a lot of ways this puts Sirens in direct contrast with numerous other medical shows (including and most starkly, Scrubs), as the gravity that comes with death is a non-factor.

When it comes to it’s comedy side, Sirens is remarkably funny. Jokes are delivered with the same urgency one would expect from the more serious side of the medical profession, with the digs often coming at a machine gun clip. While the bulk of the humor tends to be thrown in the direction of new recruit Brian, the best gags are thrown at the worst patients that the crew are forced to endure, whether it’s a businessman who has a coke bottle trapped in an uncomfortable place and an indignant jerk whose spewing venom at Hank after being struck by lightning.

If there is one thing that feels extraneous, it’s a tepid romantic angle between Johnny and Theresa that’s tacked on. It feels forced because all of the plotting comes from the ridiculous maneuvers that the show takes to force the two exes into the contact. As a show that focuses entirely on it’s A plot (in the first two episodes, we see nothing that resembles a B plot), this drags the show to a screeching halt at points, clashing with the incredibly tight rapid-fire rhythms that make Sirens shine.

The Final Verdict: Sirens clicks in all of the right places, being wickedly funny while focusing on the mundane aspects of medical work. It also gets the most out of being fearlessly bawdy, while maintaining the sort of “in your face” persona that people have come to associate with Denis Leary’s brand of comedy. Check it out if you’re looking for something fun in the 10 o’clock hour (though it also faces stiff competition from Andrew Daly’s Review). 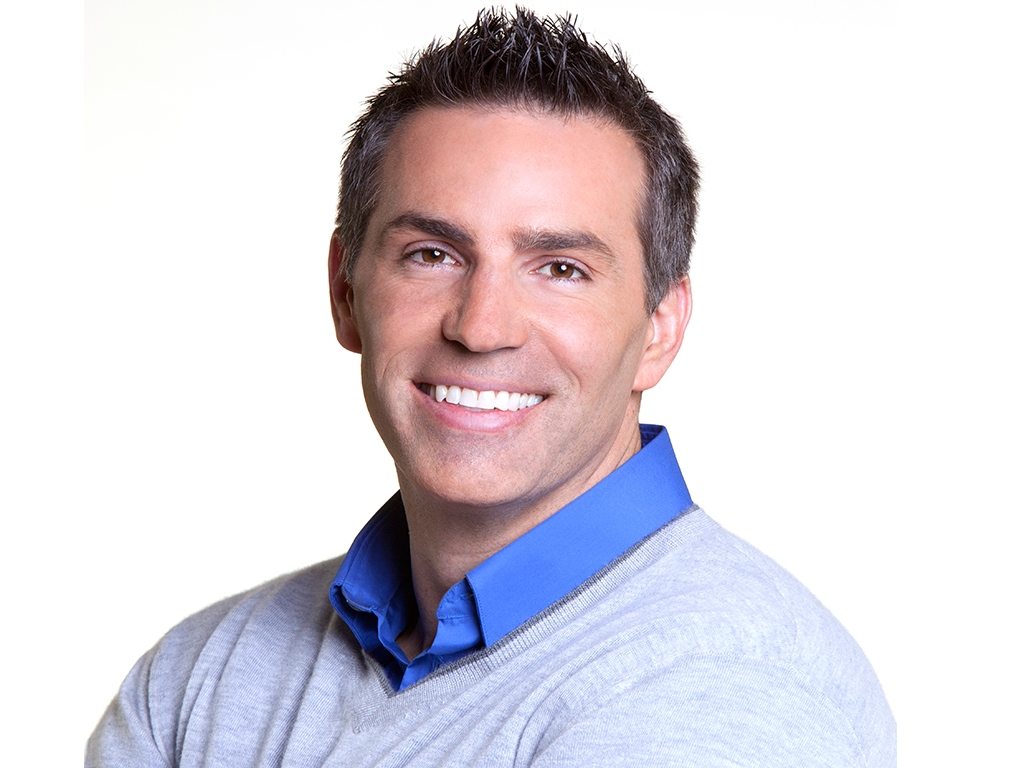 The Moment: Thursdays at 10pm Eastern on USA

There are numerous archetypes we see in Reality Television: the “larger and/or crazier than life” show, the “dating” show, the “rich people behaving badly” show, and the “lots of people cramped in a small space” show, but one sort of show that often gets overlooked in the reality genre is “live your dreams” show that is best exemplified through MTV’s Made and CBS’s flop The Job. It is from that cloth that USA provides it’s newest show, The Moment.

The Moment follows Kurt Warner, Super Bowl winning quarterback of St. Louis Rams and Arizona Cardinals fame, as he travels around the country giving ordinary Americans a second chance at the dream jobs they were forced to sacrifice to give themselves a better life. Warner himself is no stranger to second chances, as he bounced around Arena League Football and NFL Europe throughout the 90’s before filling in for an injured Trent Green and leading the Rams to a Super Bowl win at Super Bowl XXXIV in his rookie season.

Our sneak preview episode focuses on Bob Capita, a factory chief and charity head who wants to be a sailor and had his dream taken from him for a number of reasons, including the 1980 Olympic Boycott and a disapproving father. Warner surprises Capita with a second chance to enter the world of America’s Cup sailing with the opportunity to skipper a professional boat. During the process, he trains with Hall of Famer and NBC commentator Gary Jobson, who runs him through the wringer in order to bring Bob back to top tier shape. From there the action moves to the East Coast, where he meets his crew including his prospective boss’s consigliere (though he didn’t find that out until a later reveal). The show then concludes with a big fate-determining race and a job interview where Bob’s final fate is determined.

The show itself is serviceable, but tosses out an incredible amount of jargon over the course of the show. That factor, as well as a relative lack of Warner during the show (Bob’s kid gets more screen time than him, and that kid is selfless beyond a human level) give The Moment a vibe as if they are semi-connected documentaries with a common theme than an actual reality show along the lines of anything you would see on Bravo. As a result, it’s fairly safe to say that your interest in a given episode is going to be entirely dependent on your interest in the subject material of the “job hunter”.

One aspect I did particularly like, however, is that The Moment doesn’t really trump up conflict for conflict’s sake. While this makes for a particularly bland show at times, it allows for the show’s rare moments of conflict to have real stakes, whether it’s the effect that a three-thousand mile move will have on their entrenched lifestyle (as you would expect for someone with a business, a family, and their own charity) or a conflict between a skipper and his first mate as to how aggressively to cut the boat when a barge interferes in their race course.

What makes me cringe with this show is the editing. There is nothing more annoying than random blur outs before major cut points. Similarly, the show edits the build up to it’s two major decisions (will they offer the job, and if so will they take the job) by slicing up quotes out of the conversations in a way that comes off like the review snippets you see in a commercial for a Broadway musical (“The only that matters more than winning are the boats themselves….”, “…but we’ll have to say goodbye to our friends…”) while often darting the camera at contrasting reaction faces before letting anyone finish a sentence.

The Final Verdict: The Moment is an interesting show to assess. It’s unfailingly positive, relentlessly heartwarming, and incredibly lacking in conflict, but in spite its’ weaknesses it’s surprisingly watchable. While I have gripes with the editing, which takes the manipulative editing aspect of reality shows and stretches it to almost parody at points, The Moment eschews most of the standard issue reality cliches which I find personally refreshing. The show feels loose enough (especially with Warner backgrounded for much of the show) that it’s hard to recommend it as a series, and easier to recommend as the sort of show you would watch an episode of here or there when the subject matter piques your attention. Overall, I feel that this is the sort of show that requires a wait-and-see outlook to see if it becomes predictable over time. 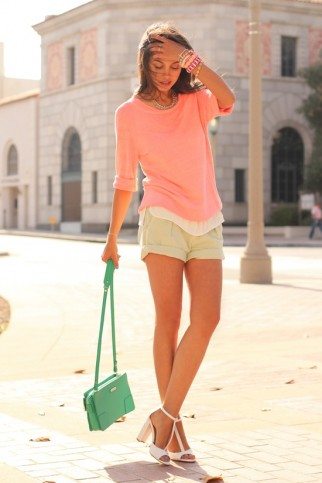 Despite the bitter cold weather we’ve been experiencing in New York, Summer is right around the corner!  And with Summer weather comes a new Summer wardrobe.  I have started stocking up since November… And I thought I’d share the trends I think will be big this season.

My favorite item for Summer 2013 is High Waisted Denim Shorts!

I am seriously obsessed with this look.  High waist jeans are flattering on almost every body type.  Every retail store is stocking up on these must have shorts so, no matter your budget, there are a pair just for you.  My most recent purchases have been from online sellers who customize the shorts the way you like; studs, lace, tears, etc…  I love the vintage feel of this style.

You can rock these with a basic white tee or vintage band tee or with a sleek button up.  Just about everything looks good with a pair of high waist shorts.  Flip flops for the beach, a pair of high tops for a rocker feel, or a towering pair of platform wedges.

Floral prints are a trend that never go out of style.  And floral will be everywhere this year.

Personally, I like my florals mixed with something a little structured or hard looking.  Think 90’s grunge but an updated version!  Adding denim to any floral print basically gives you a vintage grunge look.  A denim vest with a strapless floral summer dress or a denim shirt with floral shorts, maybe?

Now for the my color choices for this Summer (drum roll!) …

My sister Theresa is actually the person to bring these wonderful colors into my wardrobe decisions.  I have always been someone who favored the furthest ends of the light spectrum (Black and White) … Summer was always a big white season for me.  I love the contrast of my tan skin against a gleaming white piece of clothing, but I have severely underestimated the subtle glow of a mint green and coral item.  Because of their neutral tones these colors can be part of almost any outfit or any article of clothing.

There are so many trends that are going to be popular this Summer and I wish I could list them all but instead I’ll just post some pics of some items I think should be in every girl’s wardrobe this Summer season!

Here are some idea’s I thought looked cute for this Summer;

Feel free to comment about anything you think I should have included and stay tuned for my Swim Wear article!