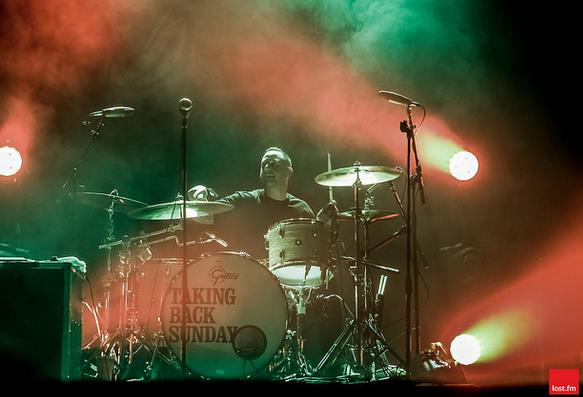 I have had the utmost pleasure of knowing Mark O’Connell from the legendary Long Island band Taking Back Sunday for almost four years now.  Actually, he was my first big interview when I was starting my blogging career many years ago when him and the band were the headliners at the annual Vans Warped Tour and they stopped at Nassau Coliseum out on Long Island.  As big of a star as he is, I was instantly impressed by how humble and sweet the guy was (and is), and he made me feel very at ease seeing as I had no idea really what the fuck I was doing yet.  It was all brand new to me.

Over the years, Mark and I have kept in touch through social networking and texting.  I have seen the evolution of TBS get bigger and bigger as time has gone by, and him and his wife gave birth to a beautiful son who will be turning 3 years old this coming December.  The band recently performed at the epic Paramount Theater in Huntington Village on Long Island to a sold out crowd.  He was nice enough to get me backstage and chat with him about the band, life and other stuff.  What I got was quite possibly the funniest interview that I have ever done.  Good stuff.  Take a look.  (By the way, Mark lost a good amount of weight so that explains the first part of this interview).

So how does it feel to be back in your hood of Long Island?

So pumped.  I actually still live here in Long Beach.

See the fat kid in me loves Long Beach because of Marvel (great Ice Cream spot).

Mark- Marvel is not my problem.  Gino’s is my problem.  Chipotle is your issue I know, so what Chipotle is to you is what Gino’s is to me.  They have a Grandma Pie there that is just to die for, and that is my fat boy problem.  Once I get one pie… its done.  This is going to turn into an interview about my eating issues isn’t it?

Not at all, just love chatting about food.

Ok, cuz I got fat guy problems, and that’s my problem.  Being a fat guy and Gino’s and their grandma pie aids in that.

Andy- I’m from the Chicago area actually, and Chicago pizza is pretty good too.  Not as good as here though. You can’t compare one to another, its different. They are different worlds.  Like cake and pie for instance.

Mark- Can Andy be included in the interview as well?

Me- Sure!  Actually the best Pizza in New York City is right in Penn Station at Rosa’s (Andy/Mark nod in agreement).  Great to go to when you are shitfaced at 2 in the morning.

Mark- Rosa’s is the shit!

I plan on being your antagonizer to losing this weight by the way.  So anyways,  this is the 16th year that Taking Back Sunday has been together.  How crazy is that to you?

It’s insane.  I am one of the original members and joined this whole thing when I was just 18 years old.  I’m happy tonight is sold out as well, not only because of the fact that we are performing in our hometown per se, but also because there is still a huge generation of young fans out there that really appreciate this kind of music.

That actually leads me to my next question which I believe I asked you years back.  Why do you think the alternative and rock scene has had such a hard time remaining relevant in the music scene?

There is so much rock, but maybe its just not mainstream.  There is rock bands that are selling out Madison Square Garden and such, its just not on the radio.  I don’t know, its just not that popular anymore.  The ones that are mainstream and considered being rock are just not that genre.  I like Lorde for instance, but she’s not rock.  She’s super talented but she’s more on the alternative pop tip than what true Rock N Roll is.  You could even see it on her face when she won Best Rock Video for “Royals” at the VMA’s.  So to answer your question, there is still a plethora of rock out there, it is just not at the forefront of millions of people like it was when I was starting out.

Your most recent TBS effort came out about a year ago, the first one in three years.  Are you happy with how it came out?

Sure.  People don’t buy physical records anymore, however I love when these kids come to the shows and they are singing the latest music as well as our classic stuff.  At the end of the day, that is really what matters.

When it comes to social networking, do you really think it matters that much for an artist anymore?  Back in the day that didn’t exist yet big artists would sell 10 million copies easily.  Now artists like Katy Perry, Lady Gaga and more have 40 plus million followers online and can barely go double platinum, if not platinum.  Why do you think that is?

It is simple.  Because music today… is free.  A good friend of mine put it this way.  If you are out at a bar, and the bartender goes “Alright, here is your drink.  You could pay 5 dollars or whatever it is, or you don’t have to”.  What are you going to do?  It’s not going to change, its done.

Back to that Long Island tip, is everyone in the current line up still living here like you are?

Well, we are all from here yet most of the members live elsewhere.  John and Adam are in North Carolina, Eddie moved to Ohio.  That poor guy!  He’s kind of stuck there forever.

Seeing as we are both from here, besides Gino’s do you have particularly a great place that you like to go to?

I got the kid now, so I’m not really doing anything cool anymore.  I hang out on the playground at Magnolia!  I drive my old hod rod, and I think that is pretty awesome.  It turns heads.

Do you get noticed in public still?

Sometimes.  The people in my building are catching on a bit. There was this one time where I was working out and there was this “Tony Soprano” type guy, and he said “What do you do?”  I replied “Well, I’m a drummer”.  He says back, “Yeah, there is a guy in this building who is a drummer too. He’s a drummer for this band Taking Back Sunday and he’s real successful.”  I said, ‘Yeah that’s me”.  As he’s lifting his 8000 pounds of weights he’s like, “No, it’s a different fucking guy!  He’s a real fucking drummer!”  He got really embarrassed after I had to tell him for the 10th time that I was that guy.

I actually had this girl the other day in New York City, who came up to me while I was with my cousin. His friend was drunk, and said “He’s in the band”.  The girl starts following me around, taunting me with “You’re not in the band, you’re not in the band”.  I never told the girl I was in the band, yet she just kept following me around making that same statement.  She would take a bunch of selfies with me in it, intoxicated, then erase them when she once again thought I wasn’t in the band.  The thing was, after a while I was like “Leave me the fuck alone!” and it just kept going on for 15 minutes. I’m not really a band guy though.  I don’t have a cool haircut or anything, so maybe that’s why she was like that.  Still fucking annoying though.

Sounds wonderful.  So what are your plans now going forward with TBS?

Well, we just wrapped up touring and are going to take a long break for a while to regroup and enjoy our lives.  I will, however continue to enjoy girls not knowing I am in the band and guido dbags yelling at me in my gym.