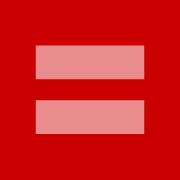 Two days ago my Facebook News Feed was flooded with red and more red and more red.  The constant change of several gay and straight friend’s profile pictures was a significant eye opening experience as the DOMA (Defense Of Marriage Act) and the ban on California’s Prop 8 have come into severe play on the Supreme Court.  What made it so amazing to me is how many of my personal friends and thousands of others are for the ban and challenge of both acts and propositions and really how the support for gays in this country has increased exponentially in the past ten to fifteen years.

The funniest part of this whole thing is the opposition.  Now, I always do my best to come into things with a mature look on both angles regardless if I happen to be biased on one side.  This time around, there is no defense for the conservative bible thumpers who ONLY have one defense in this whole thing- the bible itself.  Really people, you take one line in an entire book and turn it into something that is so beyond catastrophically stupid that we even have these ridiculous and time consuming debates, court cases and millions of people feeling like second class citizens.

I will only speak from my experience here.  I always get the sense that these right-wing, old fashioned homophobic people view gay men in particular as only one way.  They fear us for several reasons and blame a lot of what they think we are on their own huge insecurities.  It wasn’t too long ago that interracial marriage was banned, now that is over.  It wasn’t too long ago that white and black people drank from separate water fountains, now that is over.  These things are all over because people stood up for what they believed was right (and actually was), spoke the fuck up and silenced the morons that were raised on their own bigotry because their parents and people around them taught to be hateful, simple minded jackasses.

This has even gotten to a point where the most right wing, conservative people like Bill O’Reilly and Karl Rove have stated somewhat in jest but really saying that gay marriage should happen.  Yes, Bill O’Reilly and Karl Rove.  Several other conservatives have stepped forward, in particular ones that thanks to Andrew Cuomo were a big part in legalizing gay marriage here in New York.  I am fortunate, because I live in one of the states that when I do get married (gotta find the guy first, hit me up I’m cute) I can do it in a legal fashion and not have to tip-toe around a civil union or drive thousands of miles to another state to make it real.  If this issue has become that drastic where the most conservative of conservatives are siding with gay and gay friendly people on this matter, then I don’t see why this whole process can be taken care of, prop 8 thrown away, DOMA taken down, and that EVERY MOTHER FUCKING STATE legalizes gay marriage.  Everyone, and I mean EVERY PERSON deserves equal rights.  This has become our civil rights movement, and we deserve what everyone else has.

As Miranda Priestly puts it so easily yet to the point, “That’s All”.