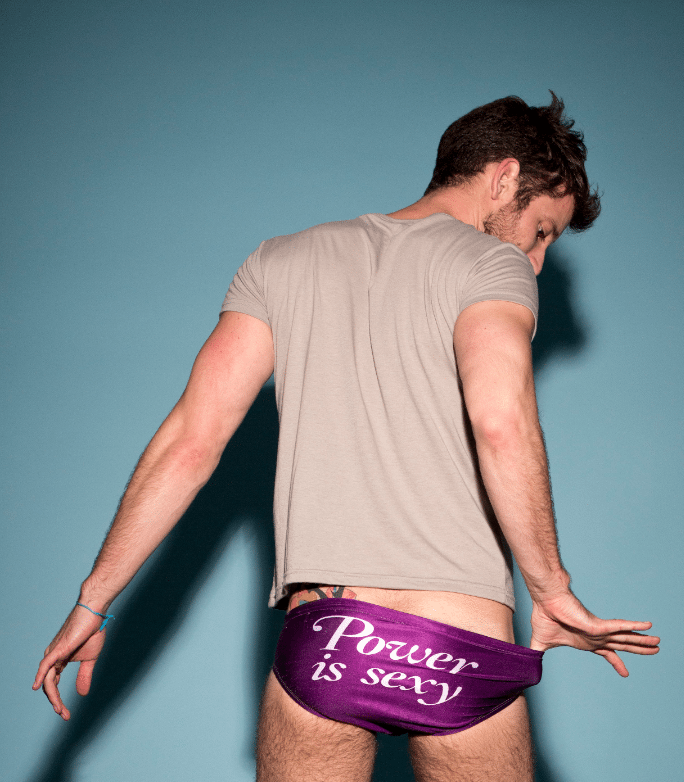 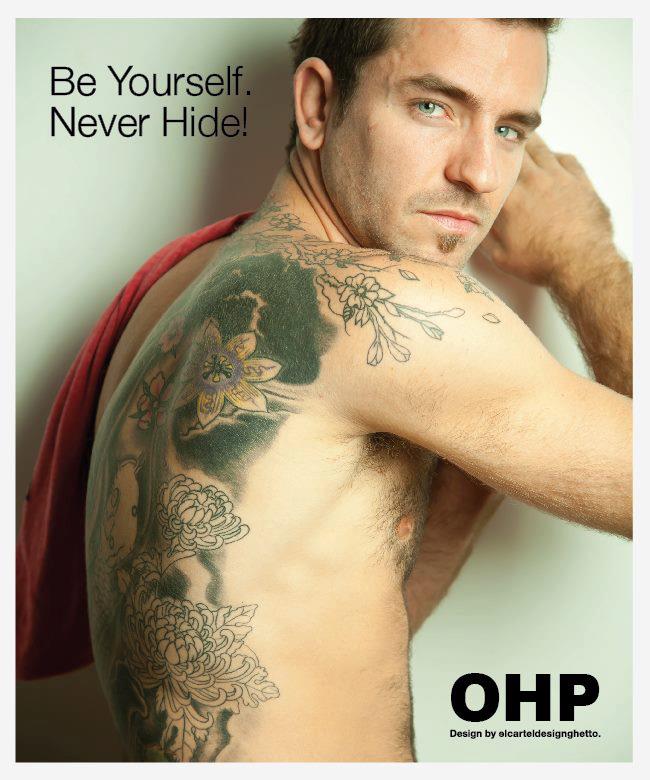 Ever since I’d first heard about it, I had been trying to find the answer to that question. I met Peruvian photographer César Mansilla Sialer on a photo shoot for a swimwear campaign I was modeling for, and he was, as I like to say, the answer to all questions, so we stayed friends. It was César who first hipped me to 100%G (or OHP), a designer from his hometown of Lima.

Its design concept was straightforward. Skillfully cut, limited edition T-shirts made from soft, Peruvian cotton with simple words printed on the front. 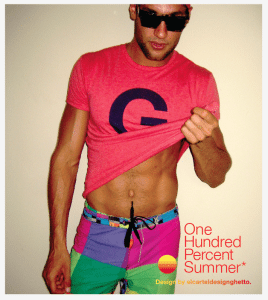 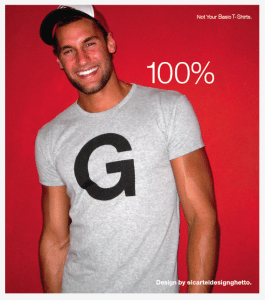 Its online presence [NSFW] and marketing were equally straightforward. Witty and irreverent posts about boys, sex, and fun, pics of guys around the world sporting their gear, and campaigns that had a raw, DIY quality, like stealthy captures of those genuine, private moments, of modeling a new favorite outfit or dancing with total abandon in front of the mirror before a night out on the town (you know you do it too). Still, there was something more that drew me in.

It certainly helped that the face of its campaign was my old friend Tom Middleton, one of the former stars of Fuerza Bruta and current cast member of Hombre Vertiente. Tom’s devastatingly handsome looks, radiant smile, and tangible kindness made the shots effortlessly steamy. 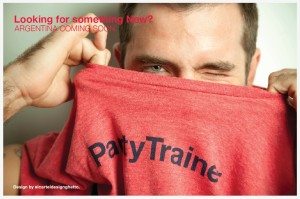 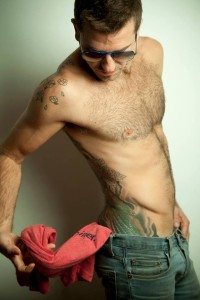 The fact that the shirts framed the male form perfectly didn’t hurt either. And yet, there was more.

I still hadn’t figured it out, but I knew I had to be in on it, so I reached out to 100%G and ordered a couple of shirts from its latest campaign, “Party Animals.” 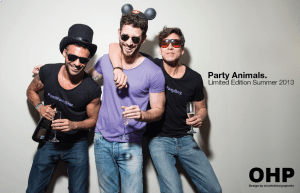 As I pulled my new shirts out of their packaging, reveling in the feel of the soft, smooth fabric against my fingers, my eye caught the writing on the inner printed tag: “One Hundred Percent Gay. One Hundred Percent Love.” G is for Gay? Apparently I had missed something key. 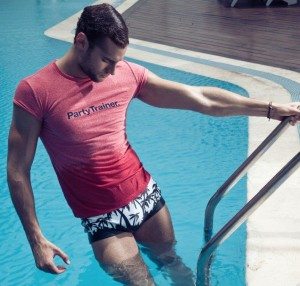 I took a look at its website: “Made 100% for the gay community. In Lima, we noticed an absence of trendy, fun, cool clothes made with the gay person in mind. That’s when the idea for 100%G began. We make our shirts using 100% Peruvian gay cotton, some of the best fabric in the world.” 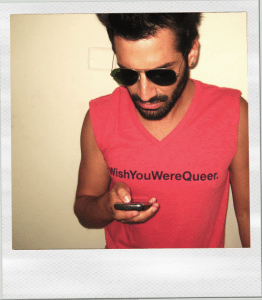 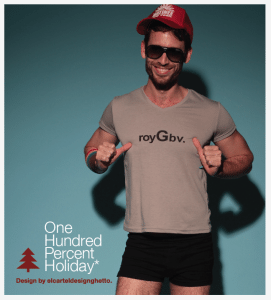 But seriously, as I got a glimpse into the thinking behind the brand, everything began to come together for me, and I found my answer.

I love 100%G because it is deliciously sexy. If you know me well, you know that I love sex, not only as a physical act in which to partake (often…very often) but also as an idea. Sex or sexiness for me has to do with a lot more than just naked bodies and dim lighting or indeed marriage and heavy promises. It is a basic energy that courses through all of life, and 100%G taps into that fundamental energy in order to encourage a different kind of (gay) pride, more human, more inclusive, more complex, less complicated.

The irreverence. The unabashed, playful sensuality. The unapologetic attitude, free of rigid definitions and precarious binaries. And the beauty. Real beauty. The kind that comes not just from a pretty face and a hot body, but from an easy smile, a mischievous nature, a relaxed poise. Beauty that isn’t afraid to get messy, silly, or frisky. Beauty that doesn’t take itself too seriously because it knows that it’s here to stay.

100%G says that it is “STRAIGHT FRIENDLY.” Of course it is. Because the sexiness that it ascribes to is the kind that Idris Elba can wear just as easily. Or James Franco. Or Legolas Greenleaf (proud geek here). Or Lupita Nyong’o. Or you. It’s the guys and girls that turn you on, not just with their looks or what they say, but with the titillating ease with which they live in their own space. An uncomplicated confidence that is flexible, free, and universal. 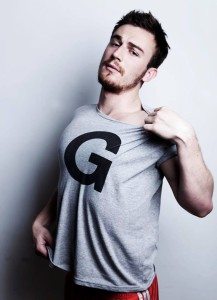 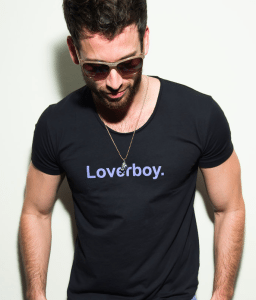 At the base of the blog entries, the campaigns, the aesthetic, and the fashion design is this basic principle. I interviewed 100%G to get a bit more insight into their vision.

OHP was born out of a design project created by El Cartel Design Ghetto, out of a need not only to create a product that was commercially viable but also to communicate an idea. We strive to use skillful design to represent a lifestyle. We want to represent the gay lifestyle in a fun and light way. 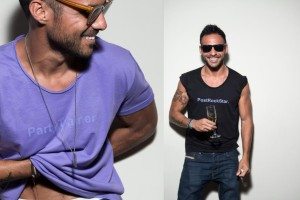 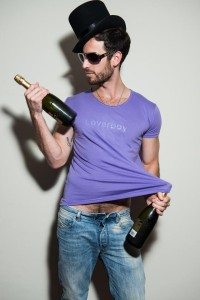 Your campaigns and your branding seem to have a very specific intention. What inspires your choices in that regard?

We openly celebrate gay lifestyles and the idea of facing everything with a positive attitude. It has been an interesting task since we are based in Peru, which is a really conservative country. Even so, we’ve been noticing an incredible trend in the country, thousands of guys are coming out of the closet, and we obviously wanted to do what we could to make sure they were well represented.

What does it mean to be sexy? 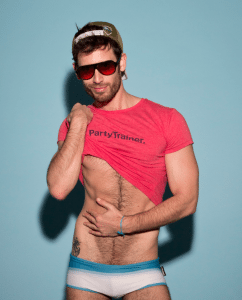 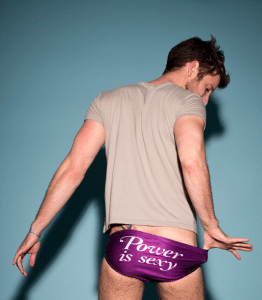 Tell me about your current campaign.

Our current campaign is in dialogue with the issues that face our community today. We’re using it to support 100% Equality. 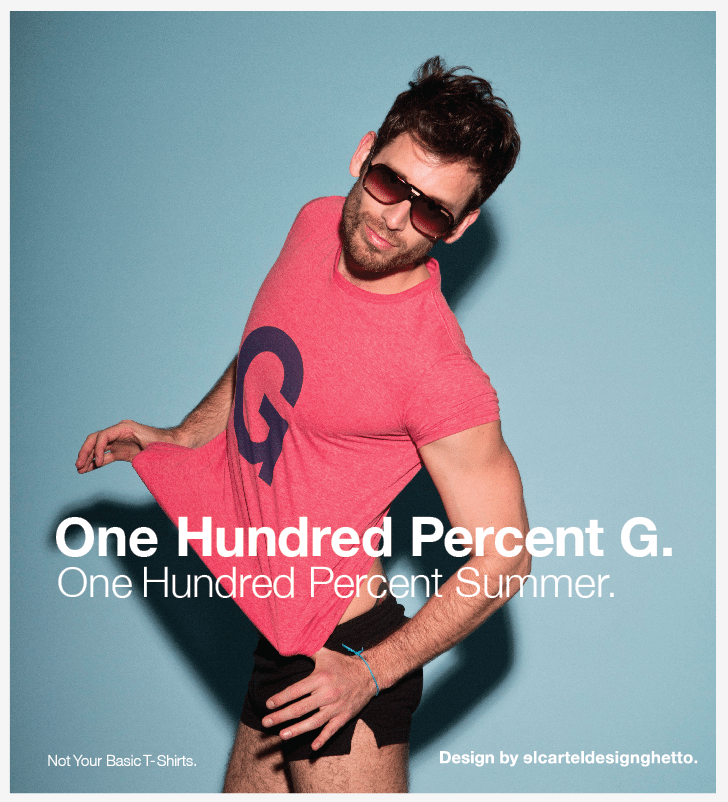