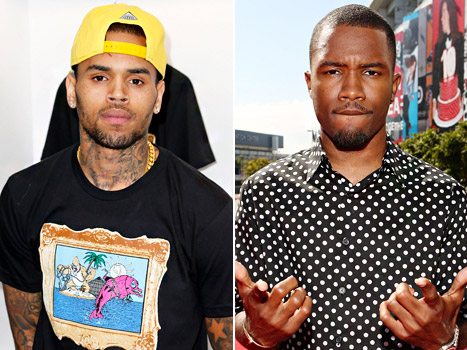 A recent story in the media that has been huge is of course the fight between Chris Brown and Frank Ocean that happened the night of January 27th outside of a recording studio parking lot.  This fight was over a parking space.  Yes, a parking space.  Today, The Boombox has stated that Ocean will not press charges over the alleged incident in where Brown punched him and got jumped, stating-

“As a child I thought if someone jumped me it would result in me murdering or mutilating a man,” the R&B star wrote on his Tumblr page Saturday. “But as a man I am not a killer. I’m an artist and a modern person. I’ll choose sanity. No criminal charges. No civil lawsuit.”

If you have been living under a rock or in a country where music doesn’t exist, Chris Brown has had quite a few altercations over the past couple of years with several different people.  The most noted one is four years back where he beat the living hell out of Rihanna the night before the ’09 Grammys.  Now, they are allegedly back together and doing music as well (“Nobody’s Business”, “Birthday Cake Remix)”.  That is a story I could write about forever, but as I’ve stated in the past, it’s her choice.  She wants to go back to that, and not listen to the millions of people who think she’s a fool to go back to the modern day Ike Turner, then go for it.  Be an idiot.

He has also gone after a slew of other people from Jenny Johnson, Raz-B from B2K, Miranda Lambert and so many more.  I find it interesting when this cat came into the game about eight years ago.  He screamed rising star, and was the nicest guy in all of his interviews and I generally loved his persona and music.  I don’t get why he went from that to now looking like a Dennis Rodman lookalike who has to be so freaking gangster in everything he does. It’s baffling to me that he wants this image, but then again he still has ten million fans on Twitter, so he must be sadly doing something right.  Sadly.

All the reports online don’t really favor Chris in this because of said history with other artists and of course Rihanna.  He was seen with a cast on his arm recently, which should garner some sympathy, but for the masses of people who believe he shouldn’t be a celebrity anymore with his abuse against women, it falls on deaf ears.  Plus Frank Ocean really isn’t know for being controversial in that kind of arena.  He is just a talented dude.  This fight better not have been over homophobia either, because that would just further Chris Brown on his tour of ultimate douchebaginess.  Both of them are up for the same Grammy Sunday- Best R&B Album.  Go Frank.