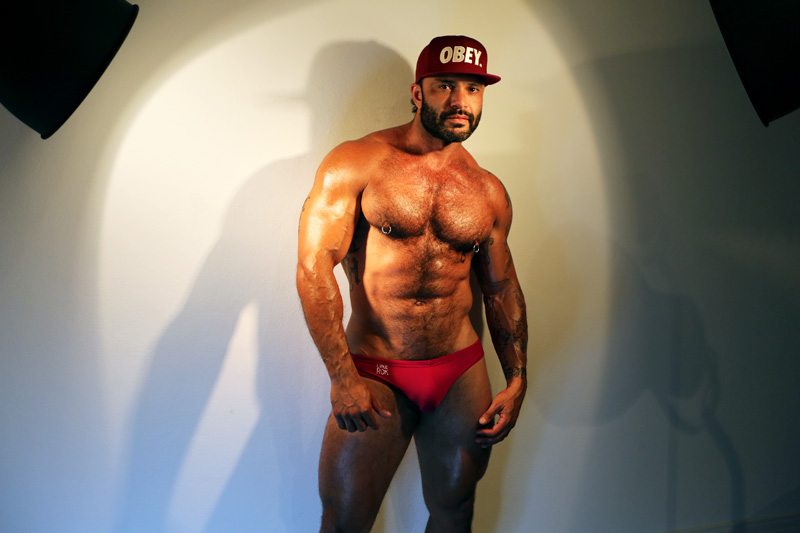 Sometimes it takes going down under to really find some good talent.  Pun or no pun, that really rings true when it comes to the handsome and talented Rogan Richards.  Rogan is a jack of all trades per se, having dabbled and excelled in the adult entertainment world as well as being a known photographer and bodybuilder both in and out of his home country of Australia.  His chiseled physique and great performances on screen has generated him quite the following on social media and his brash and bold personality has also made him one of the most requested performers the industry has seen in years.

Being that I am a fan, I wanted to sit down with Rogan and get to know him outside of the industry.  His fresh personality is seen even throughout this interview, where he discusses his love for photography, bodybuilding and his on screen persona, as well as his take on barebacking and why he would love to work with Denise Richards at some point in the future.  Definitely an interesting guy to say the least.  Take a look.

Thanks Rogan for sitting down with us.  So how did you get into the adult industry in the first place?

I sent my pics to a bunch of Companies I wanted to work for. Men At Play picked me up and I started filming for them and then the others came-a-knocking.

I usually find that in past interviews people in any industry have inspirations that further their want to be in the field that they are in.  Were there any that inspired you?

Have you always been an avid bodybuilder or was that something that happened later on in life?

I started bodybuilding when I was 15 but I fucked around for years. It wasn’t till I got on a reality television show that I actually put some effort in. After I saw what happens when you actually apply yourself properly I hit it hard and never looked back. I went from physique model to bodybuilder and am planning on doing my first competition this October.

For people wanting to get into bodybuilding, or even get into better shape as the summer is coming, what do you recommend them doing regarding diet and exercise?

Use your brain. Too many peeps will go into the gym and ‘push’ weights around. It’s not what you do its how you do it. Also they follow fads in magazines about what to eat which is the worst thing to do. EVERYTHING you need to know on how to be a successful bodybuilder is at your fingertips with the Internet. You just have to “want” it enough to by pass the quick fixes and put the effort in.

Regarding your time in the adult industry, has it had a mainly positive influence on your life overall?

HELL YEA! It has taken me around the globe, given me some great friendships, landed me in Spain where I met my boy friend and open other career opportunities for me. Of course like any profession you’ll always come across wankers but I can say it’s been more positive experiences than negative ones.

You are seen mostly as a top however I saw that you recently bottomed for a Titan movie.  Are you open to becoming more versatile in scenes or do you prefer being one or the other?

In my personal life I’m 100% ALPHA TOP FULL THROTTLE. Having said that, I am a crowd pleaser, so maybe in the future you might see me playing out crowd requests, so to speak.

Barebacking in the adult world has becoming hugely prevalent to much criticism.  What is your take on that part of the industry?  Do you condone it?

None of us want to wear a condom when we have sex. And I think the black and white approach of safe sex or no sex is oblivious to the younger generation who weren’t subjected to the Aids propaganda in the 80s and the older generation who lived through it are tired of it and much more carefree. It’s not about condoms anymore its about education. EDUCATION = PREVENTION. If you are big enough to have unprotected sex you should be big enough to educate yourself on what risks are out there, what activities subject you to what risks, and most importantly be getting sexual health checks on a regular basis.

Is there anyone you are looking to work with, both actor, director or both, that you would like to work with?

I would die if I got to work with Denise Richards in a Bruce LaBruce film.

My immediate plans are to launch my WAY OVERDUE web site and get my USA VISA. After that, “WORLD DOMINATION!”

Anything you would like to add to this interview?

It’s ALL about the FLEX!

Be sure to keep up with Rogan Richards on all of us social networking sites!