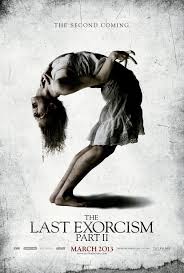 This past weekend I paid the ridiculous $12.50 to go see the 2013 horror movie Mama.  Mama is co-written and directed by Andres Muschietti, co-written by Neil Cross, and produced by Guillermo del Toro.  The movie has a dark, cold feeling to it.  The colors all seemed very ominous and frigid.  The special effects were mediocre and the soundtrack was not memorable.

The story begins with a wall street broker gone rogue who shoots his work partners and then returns home to execute his wife.  After brutally murdering his wife, Jeffrey, proceeds to kidnap his 2 daughters, Lilly and Victoria. The three of them flee in his Mercedes and, because of the icy roads and Jeffrey’s manic state of mind, crash into the woods.  Of course, he finds a cabin to hide out in, because there’s always an abandoned cabin in an isolated wooded area (yes, I am being sarcastic).  Turns out, the cabin is already inhabited by “Mama.”  Mama is the ghost of a mental patient from the 1800’s who escaped and kidnapped her baby from an orphanage.  Mama isn’t too fond of Jeffrey and he “disappears”,so Mama looks after his 2 daughters.

Cut to 5 years later.  Lilly and Victoria are found in the woods, because of their Uncle Luke’s relentless efforts, and, after some psychiatric treatment, move in with their uncle Luke (Nikolaj Coster-Waldau) and his girlfriend Annabel (Jessica Chastain).  As one can imagine, the girls have adapted to living in the woods and the younger of the two, Lilly, being an infant when she was brought into the woods, walks on all fours and can barely speak.  The elder daughter Victoria is slightly more adjusted.  The creepiest part of this movie was the way the girls walked and spoke.  Lilly contorts her body in ways that seem very unnatural.  Also, the sounds Lilly made were completely unnerving, think The Grudge and Signs.  Eventually, the girls start speaking to “Mama” and playing with her.  The first entrance of “Mama” was actually unexpected and terrifying, causing everyone in the theater to jump out of their seats and scream, followed by a rolling laughter.  Although the ghost looked a little to digital for my taste, she was disturbing nonetheless.  Distorted face and disjointed limbs.  The movie reaches its climax when we find out “Mama’s” story and her jealousy, over taking care of Lilly and Victoria, causes her to attack any adult in her way.  The ending was actually quite unexpected and almost brought a tear to my eye.  But you’ll have to see it I don’t want to spoil the whole thing for you!

Mama definitely had its scary moments.  I would define it more as creepy than scary.  The acting was actually pretty good, especially by the youngest daughter Lilly, played by Isabelle Nélisse.  I have to say, as a horror movie buff, that I haven’t seen many good frightening flicks made in the past decade or so, but Mama was worth the watch, but maybe not the $12.50 movie ticket.