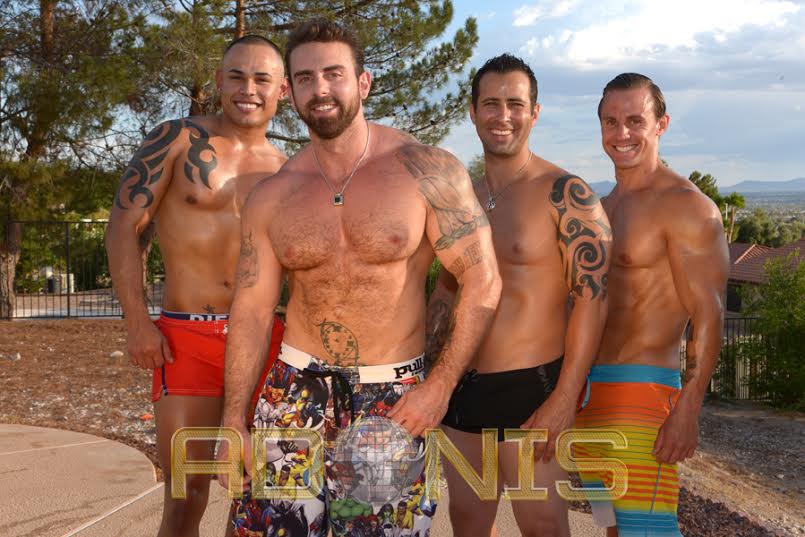 Sometimes when a good idea happens you just can’t keep it down.  For the LGBT community, in particular the letter G in there, Adonis Lounge in New York City has become quite the popular spot for gay men to go, enjoy a drink and chat amongst some of the most beautiful men in our city.  Kind of like an elevated gogo boy experience per se, except these guys actually have conversations with each customer as opposed to standing on a box and dancing to a repeating beat.

After a successful opening in the Los Angeles area, they are expanding even further into sin city itself, Las Vegas.  Already known for its colorful city, lifestyle and personality, Adonis Lounge seems to be the perfect spot to plant itself in the midst of all the glory that Vegas has to offer.  From the hot men to the awesome atmosphere, I have no doubt that third time will really be the charm for something that just started out as an idea a couple of years ago (article here).  I recently sat down with headliner for Adonis Lounge Las Vegas, Xavier Muscle (@xaviermuscle on IG & Twitter) about the grand opening this coming Saturday, the business itself and what he sees for its future.  Check it out.

What spurred the idea to bring Adonis to Las Vegas?

This has been an ongoing pursuit since I moved to Vegas 2.5 years ago.  When I left NYC to move to Vegas, the plan was to come out and open up an ADONIS LOUNGE on the strip.  Our original location and plans fell through so I shifted gears and hosted a BIG MUSCLE EVENT every Thursday at Share NightClub for about a year called “ALPHA THURSDAYS”.  We featured the hottest muscle that Vegas had to offer every Thursday (lap dances and VIP rooms.  From ALPHA THURSDAYS, I felt that I made a dent in the Gay Las Vegas market and decided (with the help of Tim and Matt) to launch the Infamous ADONIS NUDE PARTY right here in Sin City.  This all lead me to where I am today – FINALLY ready to blow the roof off of Vegas with a weekly, Saturday, Adonis Lounge event at the HOTTEST AND BIGGEST GAY NIGHTCLUB IN VEGAS – SHARE NIGHT CLUB.

Known as Sin City, Vegas is already well known for its biggest male stripper attraction- The Chippendales. How is this experience different?

Chippendales is more of a show that showcases hot men that you can’t touch and can’t tip, not very interactive or even Gay friendly from what I’ve been told.  On the other hand Adonis is TOUCH, TIP, TOUCH, TIP and in some cases you can even “touch the tip”.

You have danced at both the NYC and LA Adonis’. Have each location inspired this one in terms of the look and feel and the guys?

Boy that’s a tough one, I’ve gained so much experience and insight working alongside all the dancers as well as Tim and Matt.  Each location is so different, I would say that Tim and Matt have adapted to their market just as I will adapt to Vegas.  How can you not be inspired with all those hard bodies around you!  Adonis has a tried and true method to their madness so it’s clear that I have a well thought out blueprint of success from those guys.

Tell me about some of the guys at Adonis Vegas. What are they bringing to the table?

I don’t care what anyone says, Vegas is the new “Mecca of Bodybuilding”.  I’m always scouting the gyms for fresh meat and these Vegas guys definitely stay in top shape and get their fair share of protein.  Plain and simple, VEGAS = MUSCLESTUDS

What special things are happening on the first night?

Our grand opening is not only going to have Tim and Matt under one roof.  Add in our headliner BIG MAX who stands at 6’2 and 290lbs and you have a muscle worshippers dream!  I have never met anyone that size in our world of lap dances.  He’s going to crush some laps for sure!  If that’s not enough, our whole lineup consists of headliner quality men.  A night that will go down in Adonis History for sure!!

What advice did my buddy Tim give you when you started this venture?

Tim’s advice?  No joke, “you’ll find yourself on your knees and even sometimes on all 4’s, so learn how to take it and grow some thick foreskin”.  Good thing I’ve got experience in the chaotic world he lives in or it might hurt like hell in the beginning!! :-O

I’ll have to bash Tim first before I give him some praise… Many moons ago, when Tim first reached out to me to do some Solo Video shoots for pennies on the dollar from what I was used to getting paid (I’m premadonaish sounding, I know) and then he wanted me to give him a referral fee on top of that… I thought, “what a bucket of sleeze”.  A mutual friend then told me, “I met Tim and he seemed like a genuine nice guy”.  I gave the sleezy NYer one more shot and danced at his little Adonis club thing.  We clicked and began our bromance which has now lead to us getting in bed together.  What does this have to do with following his footseteps? NOTHING…haha ok I’ll answer the question… YES TIM I WANT TO FOLLOW YOUR FOOTSTEPS!!  For real though, Tim has created something huge out of nothing and it would be silly to not want to follow his VERY LARGE footprints.

Finally, an easy question… RAUNCHY, MUSCLEGODS and HANDSON (not an actual word)

Anything else to add?

The great part of being on a team with Tim and Matt is that we are ALL customer service oriented.  Connecting with customers and being readily available for issues or perhaps someone wants to share their gratitude for an amazing experience.  A prompt response and acknowledgement is a key component to a successful business.  At any given time, you can reach Tim, Matt or myself via Email, Facebook, Twitter, and Instagram.  No one else runs these accounts but us.  It makes for a heavy work load but it’s important to me as well as the other 2 stooges.  Vegas is now on the ADONIS map and I’m really looking forward to what’s to come…