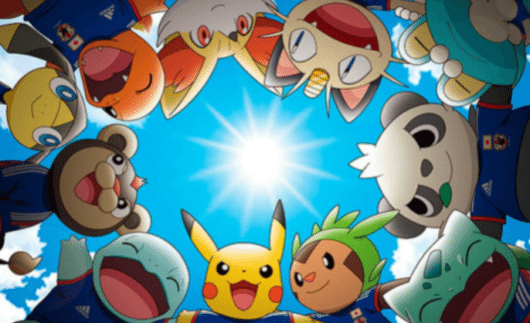 Japan is channeling the Pika-power.

What’s cuter than Pokemon? Dressing the lovable monsters up in soccer uniforms and having them represent your country as its mascots. Never one to shy away from shameless cuteness, Japan has named Pikachu as its national soccer team’s mascot for the upcoming World Cup in Brazil. Pikachu won’t be going alone, though; it seems that he’ll also be bringing along some of his friends to join in on the fun (from Pikachu, clockwise: Squirtle, Litleo, Helioptile, Charmander, Fennekin, Meowth, Froakie, Pancham, Bulbasaur, and Chespin). Clearly the Japanese are capitalizing on their hottest commodity right now, even more so than the famous Mario.

However, I can’t help feeling like they’ve dropped the ball in a couple of instances here. First, it’s obvious that the choices shown in the above picture are meant to plug the most recent releases, X and Y. Of the eleven selections, six of them are those who made their debut in the newest generation of games. Oddly enough, the other five were part of the original 151. While it’s great for Nintendo that this is a sales-driven approach, I would’ve liked to see Jigglypuff (because it’s one of the most iconic Pokemon) and Voltorb (because it’s a ball) used instead of, say, Meowth and Helioptile… and yes, I realize how ridiculous I sound nitpicking this.

This is going to sound like wishful thinking here, but I could potentially see this springboarding the franchise into some sports titles down the road. Who wouldn’t want to play a Pokemon-based soccer video game? Or basketball? Or perhaps even football? I’d buy any of those games in a heartbeat with no regrets whatsoever. Whatever happens in the future of the series, this latest endeavor is sure to be memorable and I salute Japan for doing it. 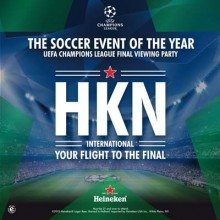 One sport that is celebrated on a global scale yet not as much on a local scale here in the United States is Futbol, otherwise known as Soccer.  Yesterday, that couldn’t have been far from the truth.  Heineken and Remezcla, who focus on providing a local guide to the best in Latin culture, brought together thousands of die hard soccer fans for the “UEFA Champions League Final Viewing Party” yesterday at Pier 36 on South Street in Basketball City, right outside Brooklyn.

The look and feel of the venue made you feel like you were walking into the arena.  There was one section sort of designed like an airport terminal, with crisp white couches at your every convenience as well as multiple televisions screens and several bartenders at hand passing out free Heinekens for the viewers.  It was heavily designed in green to coincide with Heineken’s signature colors and featured several hostesses dressed in color patters that echo Heineken as well.

That was one side of the event.  While walking through to the other side, they then designed it to make you feel like you were walking into freaking Wembley itself and that you were apart of the game.  As I was walking in I could hear the roar of the crowd at hand as the game had gotten underway about fifteen minutes into it.  That aspect of the venue was gigantic as the game played on one of the largest television screens I had ever seen and witnessing people root for either team or just there to have a good time.  They had a fantastic local German bakery that served us some of the most delicious Bratwurst I have ever tasted which went down really well with the endless Heineken at hand.

The two teams playing at hand in the UEFA finals were rivals Bayer Munich and Borussia Dortmund in a thrilling ninety four minute spectacle of a game that in the last two minutes saw Munich pull ahead 2-1 due to it’s star player Arjen Robben making a last minute goal.
It was a moment of long-awaited deliverance for both Bayern and Robben, after defeats for the Bavarians in the final of the competition in 2010 and again in 2012, when they lost a cruel penalty shoot-out to Chelsea on home soil. Robben had set Bayern on the way to victory after an hour of the first all-German final when he teed up Mario Mandzukic for the opener, only for Ilkay Gundogan to equalise from the penalty spot in the 68th minute.

Before, during and after the game they had a sick DJ perform some current club bangers such as “I Don’t Care” by Icona Pop and everyone’s favorite “Harlem Shake” by Brooklyn’s very own Bauuer.  The festivities went on from about 1 in the afternoon to about 7:30 at night, and from the looks of it everyone seemed to have a really great time including me and my friend.

Want to know more about the sponsors and the great organizers of this event and how they could help yours out in the future? Go onto Remezcla‘s website to learn more about what they are all about and for all things Heineken and UEFA check out their sites as well.