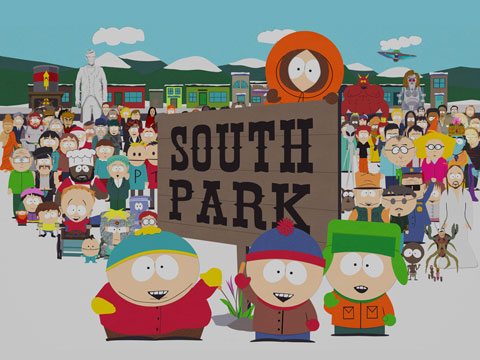 Getting you primed for The Stick of Truth.

This coming Tuesday marks the release of the long-awaited game, South Park: The Stick of Truth. The anticipated RPG promises deep gameplay with the wild humor that South Park brings on a weekly basis, and I feel it best to honor the series’ storied success with my personal Top 10 favorite episodes, in advance of the game’s release:

10. “Royal Pudding” – If tradition is more your speed, then saddle up for some wacky Canadian customs. Some examples, you ask? Well, how about ripping off your bride’s arm and then shoving it up your ass? Covering your arms in butterscotch pudding, then having the bride scrape it off and spread it on her face? There actually is a story to be had, too, and that is the rescue of the Canadian princess from the evil Tooth Decay by Ike.

9. “Crème Fraiche” – Ever wish for a sex hotline for foodies? This episodes brings such a desire to life. After becoming addicted to and seemingly sexually aroused by the Food Network, Randy pursues cooking while Sharon discovers the Shake Weight when she believes that she is no longer attractive to Randy. While she’s working out, he’s appearing on challenge shows after taking over the school cafeteria. Eventually, Sharon realizes the true purpose of the Shake Weight, which is what we’re all thinking every time one of the commercials airs: handjobs.

8. “Super Fun Time” – Go back to 1864 in this “super fun” episode where a class trip to Pioneer Village turns ugly real fast. A group of armed men who had just robbed a Burger King show up and take everyone hostage. Meanwhile, Butters and Cartman had ditched the trip (Cartman wanted out and Butters is his buddy for the field trip, so he’s forced to go along) to hit up Super Phun Tyme, a nearby arcade. Since the people of Pioneer Village can’t break character, the hostage situation only gets worse in the most hilarious ways possible. Eventually, Stan plays this to his advantage and saves the day.

7. “Fishsticks” – A rather benign joke from Jimmy turns into a crisis when Kanye West believes he’s been called a gay fish (sources say that this might actually be true) and as he’s done with most of his career, Carlos Mencia claims credit for the comedic sensation. Meanwhile, Cartman spends most of the episode convincing himself that he was the one who came up with the joke, and that Jimmy stole it from him. Finally, Kanye comes to terms with being a gay fish, and swims happily among his own kind.

6. “Cripple Fight” – Jimmy and Timmy throw down in what I consider to be the greatest fight in South Park history. Here is the iconic fight in all its glory for your viewing pleasure. I need not make a further case for this episode’s inclusion on the list.

4. “Imaginationland” – I’m grouping all three parts as one episode here because they truly capture the essence of the show as a whole rather than separate parts. The saga begins with another argument/bet between Kyle and Cartman. Cartman believes that leprechauns are real, and naturally Kyle does not. If Cartman can prove they exist, Kyle would have to suck his balls. If not, Cartman owes Kyle $10 (kind of a lopsided bet, in my view). After stumbling upon one and later being transported to Imaginationland, the boys embark on a mission to save all the fabricated creatures from their evil counterparts in an attempt to cram as many awesome references as possible into three incredible episodes.

3. “The Losing Edge” – If you’ve ever heard someone yell out “I’M SORRY, I THOUGHT THIS WAS AMERICA” while impersonating Randy, this is the episode they’re referencing. The boys are stuck playing baseball, a sport they all hate, and continuously try to lose games to no avail. Randy takes the “being a crazy parent at their kid’s sporting event” archetype a bit too far when he constantly gets wasted and fights fans of the other team at every game. Eventually, he meets his match when he takes on Batdad, and when the fight spills onto the field he gets the South Park team disqualified to the delight of the boys.

2. “Good Times With Weapons” – What if South Park tried an anime episode? Take the kids to the fair and let them buy ninja weapons, and you have your answer. Cartman creates an omnipotent persona for himself as the boys fight evil and other ninjas with their very real weapons. After Butters (as the nefarious Professor Chaos, who I hope appears in The Stick of Truth) catches a shuriken to the eye from Kenny, instead of taking him to the hospital and admitting fault they dress him up as a dog and try to take him to the vet.

1. “Scott Tenorman Must Die” – If there’s one episode of South Park that will always appear in a top whatever list, it’s this one. If it doesn’t, tell the person who made it that they’re wrong. Kicking off the show’s fifth season, this episode features Cartman being bullied by 9th grader Scott Tenorman. Mostly centered around money and pubes, Cartman gets trolled by Scott at every turn. That is, until he hatches the most brilliantly evil plan I have ever seen in action. It’s so evil that I could never do it justice by trying to explain. Click here and enjoy the deliciousness.

Primetime animation is arguably more popular than it’s ever been right now, with the raunchy cartoons of Seth MacFarlane dominating television ratings and the pop culture lexicon. Still, television’s more cultured viewers most likely feel a hole where ingenuity should be since King of the Hill came to a close. The Simpsons lost its edge over a decade ago, South Park has been faltering, and I seriously doubt Mad Men’s audience would consider the excrement-vomit jokes on Family Guy worthy of water cooler talk. Thing is, there has been a critically acclaimed adult themed animated series on cable television for nearly a decade now, and it gets half the ratings as its network counterparts. A show that not only puts other animated half-hours to shame in terms of writing, animation, characters, and story-telling, but it’s arguably one of the best shows on TV period. That show is the Venture Brothers.

Airing on Cartoon Network’s Adult Swim block since 2004, the show immediately stands out from the more absurdist shows that have given the channel the label of “stoner friendly”. Created by Jackson Publick (a principal writer on  popular 90s Saturday morning cartoon, The Tick), the show initially began as a parody on the old Hanna-Barbera cartoon Johnny Quest, as it principally focused on Professor Venture and his two sons, Dean and Hank, going on scientific-driven adventures. Since then however, the show has grown to embody numerous satires of things you might have grown up with, from Marvel Comics to David Bowie.

The show seems to reference so much that just about any type of nerd could watch this show and feel satisfied. An episode from last season was a homage to film noir, with Hank playing a detective and developing his own Philip Marlowe-brand of dialogue, complete with black-and-white coloring and grainy resolution. The episode even managed to lend audio and visual references to non-noir films of the classical Hollywood era, such as Some Like it Hot and His Girl Friday. If it weren’t for the episodes reliance on continuity, I’d easily recommend it for viewing in film studies classes.

Of course, it takes more than geeky references to make a show great, and the writing on The Venture Brothers is so sharp you don’t have to be part of the comic book crowd to enjoy it. Being one of only a handful of Adult Swim shows that runs a half-hour per episode (as opposed to shows like Aqua Teen Hunger Force and Tim and Eric Awesome Show Great Job which only run about ten minutes), the show certainly makes good use of the time it’s allowed. Airing at a late night timeslot on a cable channel, Venture Brothers’  humor is certainly edgy but never gratuitous. Half the fun of the show is watching all these familiar archetypes go through seriously twisted reimaginings (there have been several episodes that have looked at the homoerotic flairs of superhero sidekicks). With continuous story arcs that include recurring characters and plot elements, I’d also recommend that people watch the show in sequential order to experience the complete benefits.

In terms of animation, Venture Brothers is easily one of the best looking shows on TV. Consisting mainly of traditional hand-drawn animation, the show has a longer production time than others (the average gap between seasons is two years), but it’s certainly worth the time and effort. The animation is always fluid, and at its best it looks like a graphic novel come to life. The character designs are equally easy on the eyes, as they look like characters from Saturday Morning Cartoons, but with a more rugged and zany side.

Like another great animated series, Futurama, the reason Venture Brothers is so fresh and fun as it takes common genre tropes and uses them to make stories that are both outlandish and relatable. After the end of the show’s excellent fourth season in fall 2010, the show has not aired any new episodes, but there is a silver lining!  We do know the show has been renewed for at least two more seasons, and the long-awaited 5th season is set to air on May 19th. That said, now is the perfect time to marathon the show’s four completed seasons. The first season just became available on Netflix, and the subsequent ones are likely to follow. You might notice that this review hasn’t been descriptive regarding characters or storylines on the show, and that’s because I don’t want to spoil how creative this show is. It’s easily the best cartoon on the idiot box these days, and likely to remain that way for quite a while.