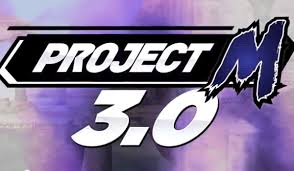 Guild Wars 2 is bringing you a White Christmas!

Avid MMO gamers will be pleased to know that Guild Wars 2‘s Wintersday events have returned to Tyria! Players can venture to the now snow-covered Lion’s Arch and participate in all kinds of fun activities! Snowball fights, escorting caravans with gifts, battling malfunctioning toys, a bell choir mini-game that is reminiscent of Guitar Hero, and Toypocalypse, where you must protect gifts from angry toys, are all part of this content update. Alongside this content is a boatload of new achievements, along with titles, gift boxes, loot bags, and a whole lot more to satisfy your Christmas spirit. In my estimation, this is the best update to the Guild Wars 2 Living Story since Halloween’s Mad King Returns event.

As someone who missed out on Wintersday last year due to being burnt out from the game (followed by losing my account password), this content is all new to me. While running around Tyria, I’ve instantly felt deprived for missing out on all the fun from a year ago. Unwrapping huge gift boxes in the open world, only to have them explode and release hostile armies of angry toys was certainly a fun surprise, though in the higher level zones this becomes more of a hassle to deal with than it’s really worth; one can simply bypass the boxes, however, so the choice is up to the player. The player vs. player Snowball Mayhem activity features two teams duking it out in a winter wonderland. Players are awarded points for defeating opponents as well as carrying a gift back to their base. Another piece of content that I found entertaining was the new dungeon, where you help Toymaker Tixx keep his workshop under control and operating smoothly. There is much to do this Wintersday, and so ArenaNet has stated that these events will persist for a month, until January 10th. After all the flops that the Living Story has produced since Halloween (namely the entire Tower of Nightmares arc), this is one update that I’m going to miss once it’s gone.

One more update to the game is the release of ascended armor. With ascended weapons and trinkets already in the game, armor will allow players to complete their gear sets and maximize their effectiveness. Naturally, it’s a huge grind to gain all the materials needed to make the armor, and taking a shortcut by buying completed components on the trading post is going to leave a huge hole in your virtual wallet. Unfortunately, not all characters are on an even playing field when it comes to crafting these goodies. While heavy and medium classes have had opportunities to craft items that can also be used on armor in the weaponsmith and huntsman professions, light classes have had no previous method of acquiring the cloth needed to make their armor. My two level-capped characters are both light classes, so it’s an inconvenience for me. However, removing all biases this is something that should have been addressed prior to the release of the update. I’m still going to make at least one set of ascended, it’s just going to take me longer than some of my friends who play warriors and thieves.

As always, this Guild Wars 2 content update is free to download and will do so automatically once you start up the game. Happy hunting! 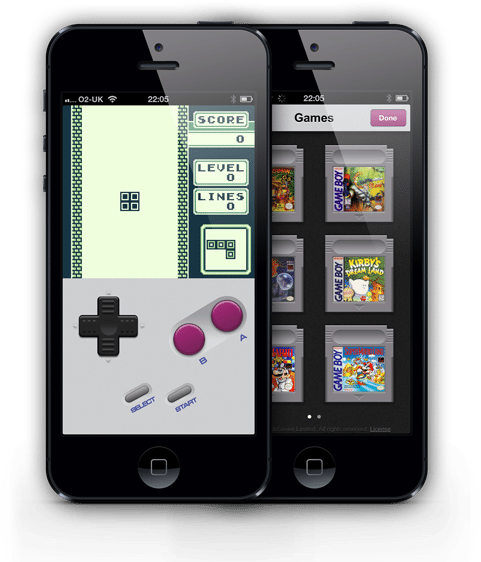 Remember the Game Boy? It was Nintendo’s crowning handheld achievement in the days when video games were a new and exciting medium. The Game Boy allowed us to take our video games out of our living rooms and play them on the go – wherever we went. It was the first of its kind.

Today of course the modern smart-phone has far outweighed the need for an individual portable gaming console. There are thousands upon thousands of games available for play on the iPhone alone. While this certainly suffices as means for adequate mobile gaming, there is always a certain joy to playing the games of old in their original form. Who doesn’t enjoy a round of Game Boy’s original Super Mario Land, or Mega Man? Nintendo still produces Game Boys, now in color, technologically advanced 3D graphics, and dual screens. Yet one thing Nintendo never did was strike any sort of deal with Apple, or any other platform, to sell their trademarked games as applications. Who hasn’t looked for  Mario Bros. or Castle Quest as games in Apple’s App Store? For those who have the latest iPhone, is it really worth spending the money on a Game Boy just to play vintage Kirby’s Dream Land?

I have seen several examples of iPhones which are jailbroken uploaded with vintage Nintendo games. However many people (myself included) have no interest in having their phones jailbroken. Certainly not for a game.

Enter: A nifty new platform, designed for the iPhone 5. Game Play by InSeven Limited has developed the loophole that my geeky Mario-loving self has been looking for. Interested? Well, the details are very specific. But if you have what’s needed to set it up, why not give it a try?

The company has developed this program specifically for the latest version of the iPhone (iPhone only). At least for now…

If you have a Gmail account, you have access to Google Drive, used to save and store files online. The App (which is free) is available at the App Store.

The link must be visited on the phone so the website can be bookmarked to your phone’s home screen directly. The link is http://inseven.co.uk/apps/gameplay/app/ 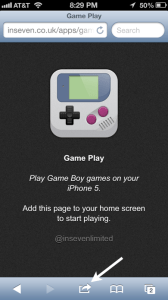 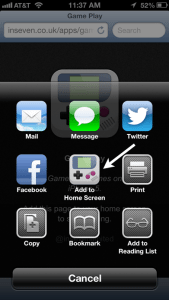 Press ADD button on your screen to open the options. 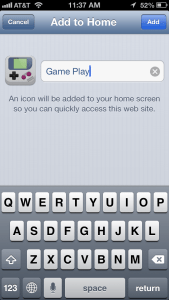 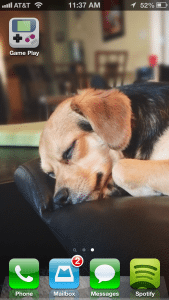 Add the page to your Home Screen.

Step 2: If you don’t already have it, download the Google Drive App 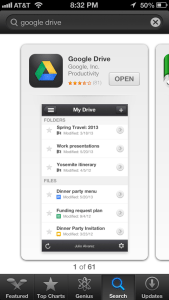 Google Drive is free in the App Store.

This step tends to be the trickiest one. The Game Play website cannot directly offer the ROM files for download. Instead, it is suggested that you search for the files yourself. Game Play does provide a list of games which currently will work for the application:

There are several different websites which can be used to find and to download game ROMS. The one I personally utilized most was one called DopeRoms.com. Specifically, if you search for game boy games, this page lists the games used for the original Game Boy, which are the only ones that currently work for the iPhone application:

*Note: The game ROMs will be labeled as GB, GBC, or both. (Game Boy and/or Game Boy Color) – If the file is only listed as GBC, it will not work.

On your computer, the saved files can be dragged or loaded into your google drive account.

Create a folder in your Drive specifically for the games. 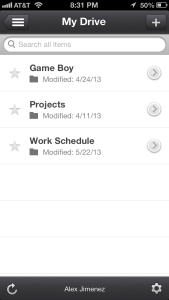 The folder and files will sync with your iPhone 5. 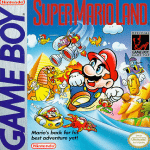 Once downloaded, add the artwork file to the same google drive folder as its game.

You then must rename the artwork file to exactly match that of the game, only changing the file type from gb to jpg. 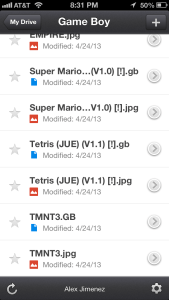 Once again, the folder and contained files on your Google Drive will sync with those on your iPhone 5 app. 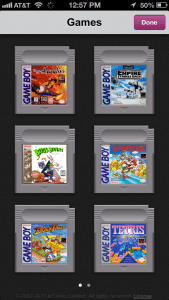 You’re finished! Open the Game Play app on your iPhone Home Screen. The Google Drive app automatically syncs with the app and the games will appear within the app itself.

*Notes on the application

– There is no sound on any of the games for Game Play. Do not be concerned when there is no sound for the games. It is not yet available. The application creators are working to add this feature soon.

InSeven Limited, the company behind Game Play, has stated that they are continuously working to improve the program. They hope to bring Game Play to other platforms soon, and are seeking to expand to include Game Boy Color games in the near future.