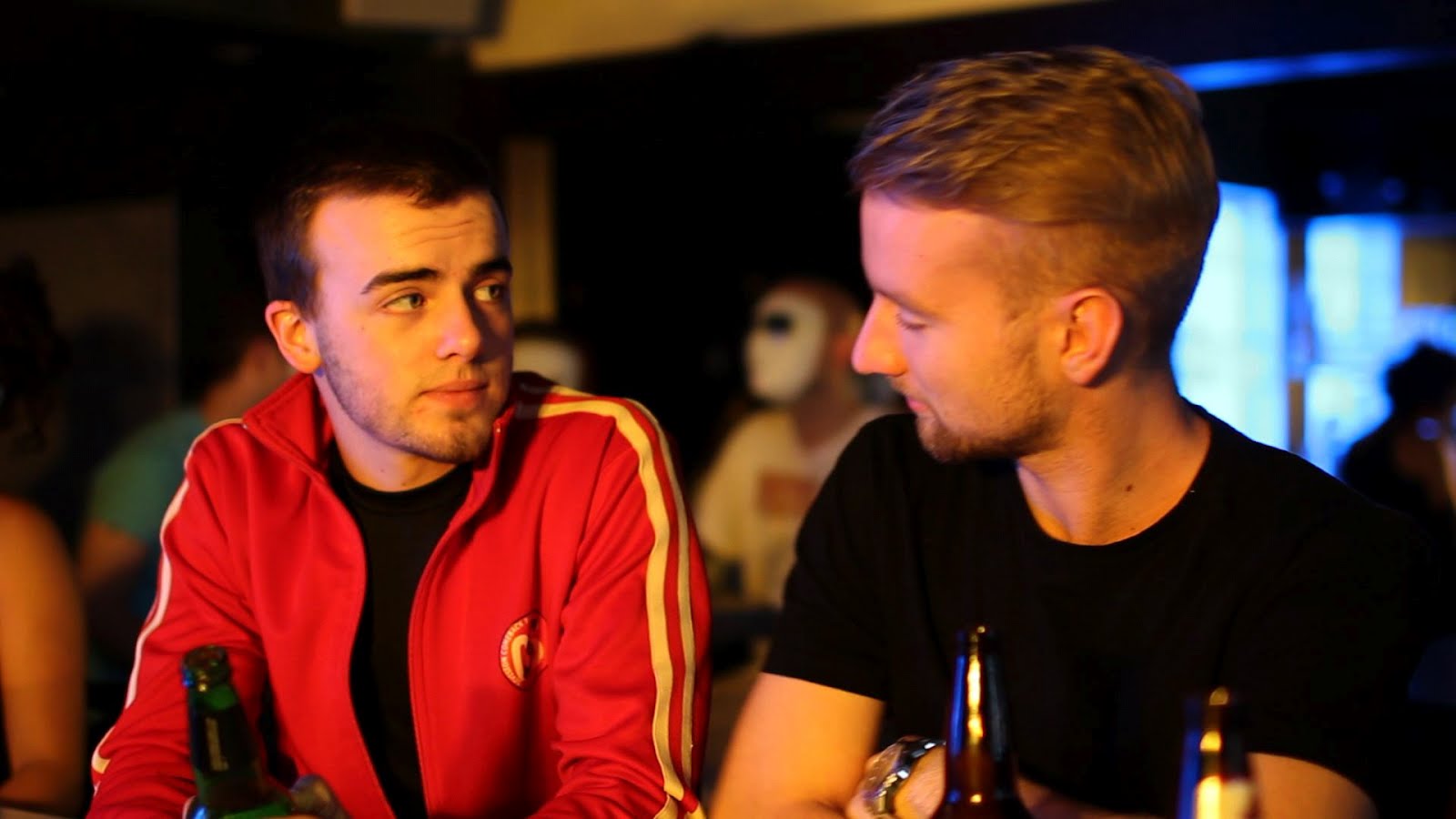 Is the “Meet Up” the new Dating?

As we enter into a new calendar year and fresh hopes for what is to come in each of our lives, something that seems to be a constant “Resolution” that many single people, both gay and straight, make  is the thrill of dating someone and falling in love.  In today’s day and age of how technology rules the world, it seems to be that getting to that point of said love is much different than when our parents were growing up.  Back then, the norm seemed to be you meet someone at a bar or a mutual friend’s party, get set up on a blind date, and so on and so forth.  These types of situations don’t seem to happen as often as they used to.  Just last night, I was at my friend New Year’s Eve party and I met a really great gay couple who explained that they met on Grindr, and had difficulty telling their boss because even though the boss was gay it isn’t exactly something that you want known that you met someone on something that most consider to be a hook up site.  But the thought does prevail, is online apps like Grindr, Scruff and Growlr the new way to meet a significant other in the gay world, or are there some people out there that still believe in the traditionalist ways of hunting for a mate where you go on an actual date with them and see where it goes?  Let’s examine this for a second.

I myself, have been in both situations where I have asked a guy out online and in person.  The problem I have with online stuff is that I tend to cut to the point after talking with someone for a couple of hours on there, because quite frankly you can have all this great conversation and it never leads to anything.  Usually I will say, “So, when can we go on a date?”.  I have had men quite shocked when I ask that, and when I ask why they usually say that they haven’t been asked on a date in so long.  Same thing if it was in person at a gay bar or party.  So what gives?  This is where I went all Carrie Bradshaw and turned to my friends for advice.  The responses that I got were quite interesting and diverse when it comes to dating in the modern world, and spoke true in regards to how each person sees this ever present aspect of our lives in our 20’s and beyond.

Many of the responses that I got came from this- We hang out first, and then see what happens.  “I think people date when things are more concrete. Personally, I’m the type to say “let’s hang out” rather than “let’s go on a date”. It’s usually less pressure on both parties and when things progress then then a more formal “date” happens”, said one friend.  Another one echoed something similar.  “It seems guys are more interested in meeting up first, something casual like grabbing a beer. There after if a connection is made then a date seems to happen.”.

Question with both of these responses is, would we think the same way if technology didn’t get in the way? We live in a world today where we can pretty much custom order a date or a boyfriend due to these apps, and ignore the creeps and guys you aren’t interested in by simply not responding or even blocking them if need be.  Would we have the same reaction as above if it was more traditional as it was 10 or 15 years ago?  Or is it simply a defense mechanism that we place on ourselves in case the guy with the really hot photo and seemingly interesting online persona turns out to be something completely different and that way makes it easier to divulge how you want to move forward with this person?

Then there are friends who say that technology has really screwed up the whole dating concept in general.  “I think technology dilutes the entire dating process…it speeds it up dramatically. Long gone are the days of courting someone; most guys in our community have a plethora of options for “dates” and therein lies the problem–make something so easily attainable and it loses its allure,” says one friend.  Another one had something similar in mind- “I think with texting and Facebook and Internet in general, a lot of the interactions we used to do early in dating we did face to face, we now do via technology. Dating as we knew it 20 years ago is over.”  Check out this article which talks about younger guys talking about online dating as a reference to all of this.

So where do we find a comfortable line in the dating world when it comes to how we approach someone?  Is it taboo all of a sudden to simply ask someone on a date, or has the ever popular “meet up and see what happens” take over and be the way of the future?  Is dating extinct… or is evolving?

What do YOU think? 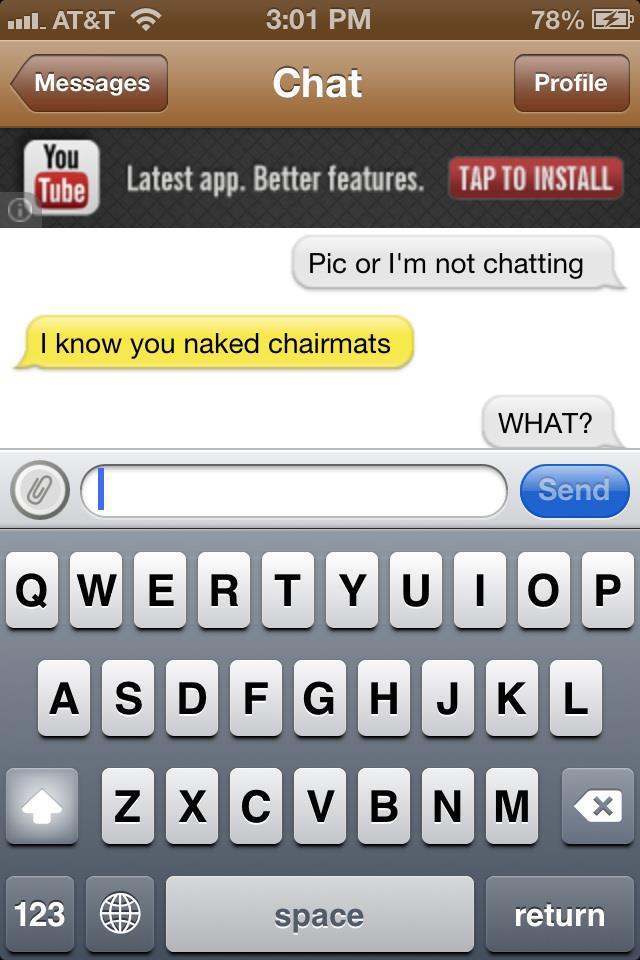 So this article is certainly not a diss to any of these three apps- I think they are all great in their own way and whether you are looking to make friends, a relationship or a hot one night stand I would recommend choosing one, two or all three in most cases. But let’s keep it real here- there are some bat shit cray cray people on those sites. And since I have been on them for the past couple of years, I myself have gotten some pretty award winning messages that would hopefully make you ROTFLOL (not that I expect you to fall out of your chair and do this, but it would be nice). That being said- here are the best of the best, the crem de la crem, of my gay app world 2.0. 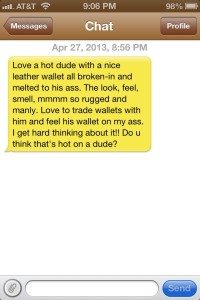 I prefer a pocketbook personally. 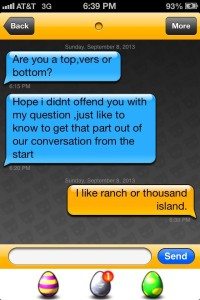 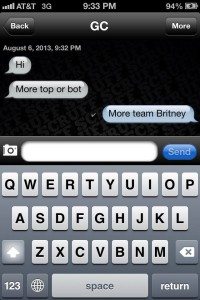 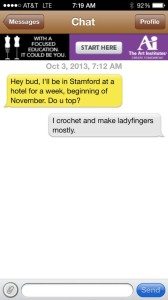 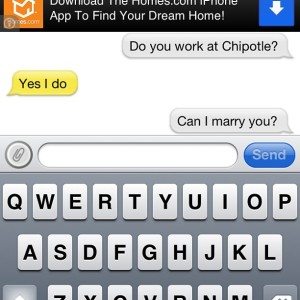 Seriously if you work here chances are you are going to get to at least 2nd base.  Just bring me home something. 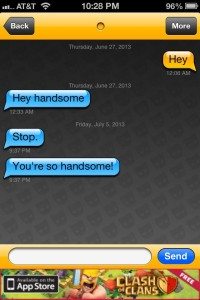 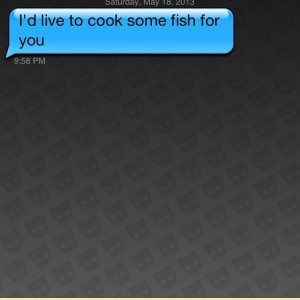 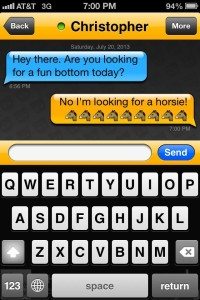 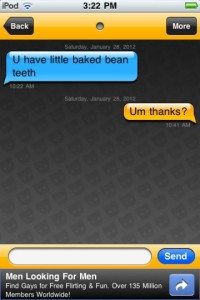 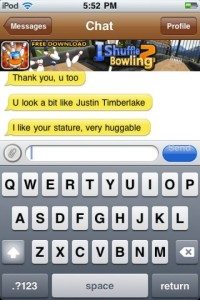 So to recap here I look like a huggable Justin Timberlake who has stature.  Sure. 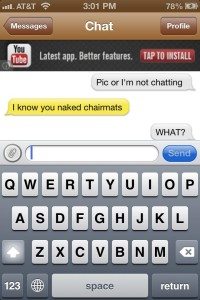 Someone google what a Naked Chairmat is so I know what i am.

What are some of the best ones you’ve gotten?  Hope this all made you laugh a little and not take these apps too seriously as these guys haven’t anyways. 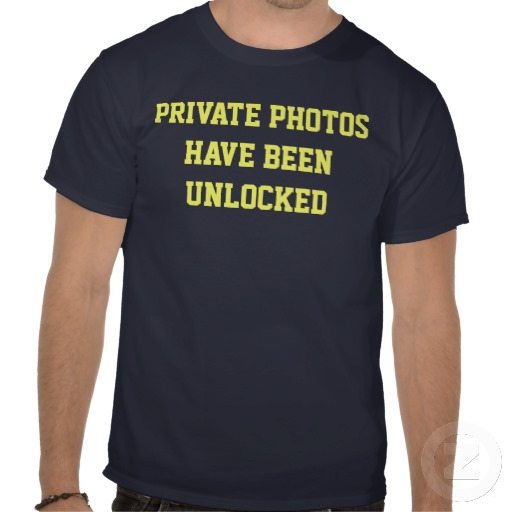 Oh, the online dating world.  Something that originally started as a small has turned into quite the revolution in the straight and gay worlds.  Many a people I know use it for several different reasons beyond the first date- business, sex, friendship, etc.  You can totally get something out of it.  Heck, I have used it to promote this page and get writers on it and I am very happy with the people that I have found simply with a sentence and a click.  So the variety here is truly endless.

With all the glory and opportunities that is out there for online dating, there are certain things that people write in their profiles or do that many can find incredibly offensive and off putting to the point where they don’t even want to reply with anything back, they just block or ignore.  This is from information I have gathered from several other friends of mine, not including myself, who find these particular attributes put on as just really intolerable-

And this particular fellow didn’t even say hello.  I am sorry, but this is at the height of rudeness.  This is pertaining to the app Growlr, one I happen to love, that allows you to have a main photo but two ones that are private.  Mine are simply face shots though there are times where I want to take two photos of my dog and use them to piss guys off who were expecting more.  I equate this to an actual experience in a bar.  Not even saying hello and asking for private photos is like walking up to a guy in a bar and saying “Get naked”.  It’s not gonna happen (unless you are at certain bars) and its the same thing online.  Geez don’t people want to at least say hey sometimes before all of that.  Good god.

This is a very controversial issue that seems to flood a lot of what is out there online.  “Party” means an assortment of drugs, usually hard ones and “play” means to hook up.  If I am going to party, it is going to be with some Lay’s Potato Chips, Sprite, and hopefully a bunch of interesting people around me at an actual PARTY. Not that kind.  I think the whole drug usage thing has become very prevalent in the gay community and this is something that is just wrong on a multitude of levels.

I am a firm believer that if someone goes out of their way to message you either with “Hey”, “Hello” or even a compliment like “You are handsome”, it is the human thing to respond regardless of interest.  That seems to be rampant as well, especially in certain areas of New York City, where guys think that if you don’t fit that certain muscle bear type they won’t respond to you. Meanwhile, these are the ones that are the most insecure of all.  If the guy messages you, at least entertain a conversation.  Make them feel good.  You never know when someone is having a bad day that a simple convo can make them feel better.