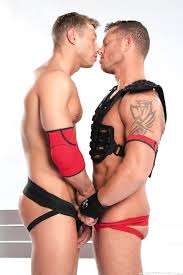 So in the last article I started telling everyone about how I got my start as an adult film star.  This article I’m going to tell you about my first time on set, and a little about the behind the scenes process we go through to shoot a scene…  Here we go…

As I mentioned in the last article, my first two scenes were with Raging Stallion / Falcon.  I have to say I was nervous when I showed up, but was in awe of how professional and impressive their studio was.  Walking in, it was a beautiful industrial loft style office with cubicles and conference tables… not at all the expected “hyper-sexual” environment most folks would expect.  We did all our paperwork and contract signing, I met with Tony DiMarco the director and the crew for the shoot, and was taken upstairs to the studio.  It was a really neat space, broken out into a couple different rooms with multiple stage set ups for upcoming scene shoots.

I met my scene partner, Johnny Ryder and was a little intimidated by his amazing abs! We walked through the set together, talked a little about ourselves.  He’d filmed a couple scenes before but hadn’t done anything in the past couple years, so I felt a little less nervous knowing he was also relatively new to it all.  Now here’s the part many folks don’t realize about porn.  Every position, activity and interaction that shows up on film is blocked just like in a mainstream movie or stage production. So our next step was to do just that with Tony.  We talked about sexual positions that would work (as Johnny was a little taller than me) with the white bench we were using as a prop, costuming and wardrobe and the story line that went along with the scene.  All of this made it tremendously easier to relax as I now knew exactly what all was to be expected. So then we were ready to go.

I know some folks come away with horror stories of being taken advantage of, or being made to do things they didn’t want to, but I didn’t have any of that occur.  Firstly, because Falcon and Raging Stallion studios are extremely professional in their processes, and secondly because I asked a ton of questions up front when we were discussing contracts so EVERYTHING had been disclosed or negotiated and pre-arranged to make everyone more comfortable.

So I walked away with a nice check for that day, and a good first experience. That was the first of two scenes I was shooting that trip, so I had a day off in between to explore San Francisco and then was back at it again, this time with super hottie Dylan Roberts! (Stay tuned for Part 3!)