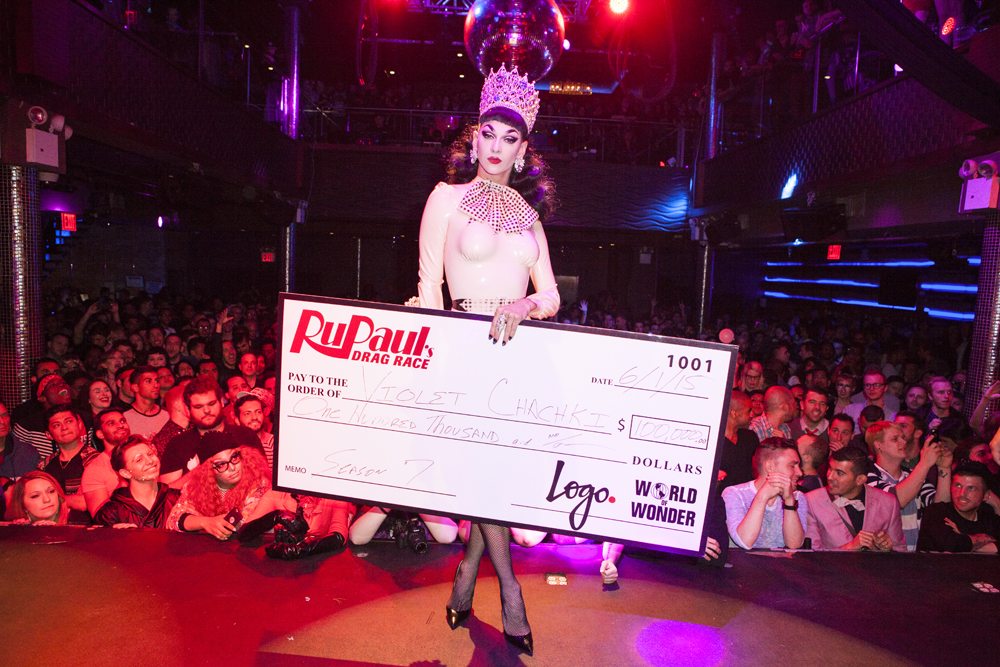 So Kitty Girls, Rupaul’s Drag Race has completed yet another season under its belt this past Monday night.  The fashionable and irreverent Violet Chachki took home the season 7 crown over the dark horse & sleeper of the competition Pearl and the funny, campy and stylish Ginger Minj.  Although the actual finale that aired on LOGO Monday was taped from a previous week, the real crown was presented that night at Stage 48 right in Hell’s Kitchen.  This isn’t the first time that Drag Race has held events for RPDR there, and is the perfect venue for this type of a show.

Even with the weather being as shitty as it was, fans and press alike showed up in droves to celebrate the season that was with several of its incredible contestants.  In the press room, some notable guests outside of this years contenders included Season 5 and 6 winners Jinkx Monsoon and Bianca Del Rio as well as legendary New York City drag queen Lady Bunny who arrived in her signature oversized blonde bouffant.

Other big time players that showed up was entrepreneur & big time adult film star Rocco Steele and his buddy (and scene partner for Raging Stallion’s Clusterfuck 2) Boomer Banks, who performed a number with the ever so beautiful and polished Miss Fame.

So out of the fourteen girls from this past season, only a couple weren’t in attendance.  Jaidynn Dior Fierce (which is a huge bummer because I really enjoyed meeting her at the premiere), Kandy Ho, Tempest Dujour, Max, Sasha Belle and Jasmine Masters were not in attendance.  To be honest, out of that group the only ones I would’ve been interested in talking to would’ve been Tempest, Max and Jaidynn as Kandy brought nothing to the show, Sasha is boring and Jasmine did enough for herself to make her a villain throughout.  Sorry, not sorry.

As for the girls who did show up to the meet and greet in the press room, I was surprised by how some were and not so surprised by how some behaved.  First off, Pearl didn’t show up for press.  I don’t get it.  You are a freaking finalist, why aren’t you talking with the people that will write about you ESPECIALLY with you having an album coming out?  Wasn’t really thrilled about that as I have attended finale parties in the past and the top three are always there.  When it comes to Violet, I still have the same thoughts that I did when I met her at the premiere party- frazzled and not overtly nice.  You don’t need to be, however she just seemed scattered and didn’t really stop for too long to let anyone really interview her.  I am happy that she won, however these are things I will remember about her as you have to be amicable to a certain degree in order to make it far in anything with this industry.  Just food for thought.

Ginger was absolutely incredible.  She is beyond nice, hysterical and we had a great conversation about the season and so much more.  I do feel as if she should’ve won the prize as overall she was consistent in my facets throughout the season, however I am still holding out hope that a big girl wins the prize eventually.  Still not over Latrice losing S4.  For as much shit as she got thrown at her this season, Kennedy Davenport couldn’t have been sweeter as well as poised and beautiful all at the same time.  To be labeled the villain of this season when you didn’t really do anything villainous must be rough on a person, but she seems to be taking it in stride and was a fabulous person to chat with that night.

Trixie Mattel was hysterical as always, looking like a Katy Perry “Last Friday Night” inspiration decked in pink and wearing these incredible rollerblades.  The makeup was overdone but in true Trixie style looked great on her.  If Katya was in the final three I have no doubt that she would’ve won Miss Congeniality.  Speaking of Katya, she looked ravishing in her black ensemble while sipping away on a red bull and giving everyone a big belly laugh with her great sense of humor.  Finally, Mrs. Kasha Davis was a delight to talk to and I hope to see more from her in the future (especially if there is All Stars 2).

The night consisted of performances from the top six as well as the crowning moment where Violet was presented with the check for her win from Bianca Del Rio.  Although many thought this was a lackluster season, the girls really did turn out some great performances and reminded us as to why they were cast on the show in the first place.  Here is to hoping that S8 knocks it out of the park!

For more info on Drag Race, check out LOGOTV.com.

*yawn* Greetings Race Queens! You might have noticed that there was no recap last week. Well, yours truly fell asleep during the episode and didn’t wake up until the Snatch Game started, so apologies all around. END_OF_DOCUMENT_TOKEN_TO_BE_REPLACED

Previously, the dolls had to make stupid parody videos and RuPaul got upset when they made fun of Drag U. Trixie Mattel went home and I’m currently writing this from jail, as I BURNED THIS MOTHERFUCKER TO THE GROUND! END_OF_DOCUMENT_TOKEN_TO_BE_REPLACED

Last week, Jasmine Masters went home. Afterwards, everyone talks about how it’s sooo quiet backstage and NOW Miss Fame speaks up about how she hated the pop the corns joke. Everyone takes their beards off. Insert Aaron Schlock joke here. END_OF_DOCUMENT_TOKEN_TO_BE_REPLACED

Previously on Drag Race, the gods made us birds, so we could fly. Fly far far away.  Apparently, it didn’t work because we’re back, only Sasha Belle isn’t!! END_OF_DOCUMENT_TOKEN_TO_BE_REPLACED

Previously, the queens all got naked! Along with the pit crew. Tempest Du Jour left, and since no one has mentioned Mrs. Kasha Davis’ age, it looks like we won’t have to deal with “OMG!! You’re soooooooo old!!” comments anymore! END_OF_DOCUMENT_TOKEN_TO_BE_REPLACED

RuPaul’s Drag Race Season 7 hunty!!! Are you ready? Did you meet the queens and watch all the fucking promo videos?! You did?!!! I’m amazed! Let’s dive right in! END_OF_DOCUMENT_TOKEN_TO_BE_REPLACED 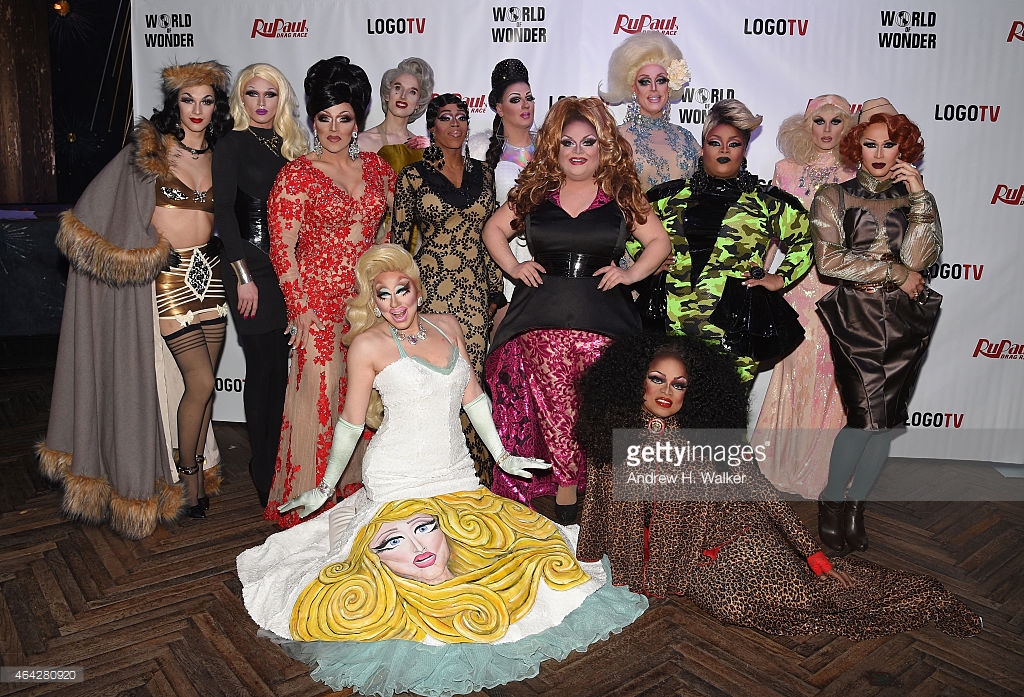 RuPaul’s Drag Race Season 7 is here, bitches!!! This means more sequence gowns! More death drops! More YYYYYYYYYAAAAAAAAAAAAASSSSSSSSSSSSSSSSSSSSSSSSSSSSS! More annoying cliques that do nothing but piss off your fan base and the judges! I’m so excited that I could rip the weave off an orphan! END_OF_DOCUMENT_TOKEN_TO_BE_REPLACED