So, last week, there was some stupid Hello, Kitty theme, that really came across as something that Project Runway would love or would look at and shake their damn head. Katya left, which makes me even more angry at this season. There was really no reason for that shit to happen since, spoilers, Kennedy Davenport didn’t stay to make it a top three with someone who’s not white. END_OF_DOCUMENT_TOKEN_TO_BE_REPLACED 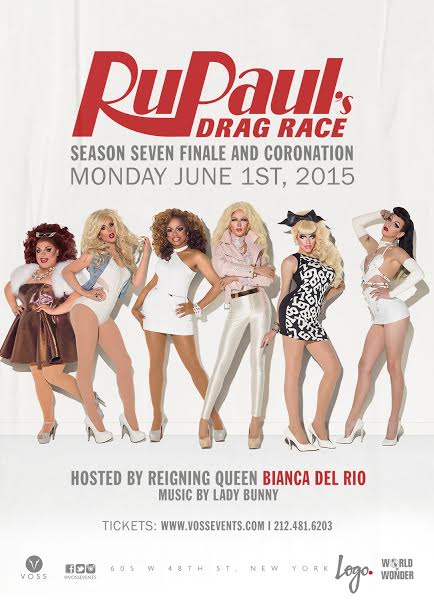 Yes hunties… another season of Rupaul’s Drag Race is quickly coming to an end.  The show, which started a little later than usual this year with a ton of changes including Untucked available only online, new judges and other thangs… will crown its winner on June 1st at 9pm on LOGO.  Even though the finale is taped on the actual network, the real crowning will take place the same night right here in New York City!

With the final five being the strongest the show has had in recent seasons- Pearl, Violet Chachki, Ginger Minj, Kennedy Davenport and Katya as well as top six finalist Trixie Mattel will all be performing that night at Stage 48 (605 West 48th Street) where the winner will be revealed.  To add even more fabulousness, the crown will be presented by last year’s winner (and best if I may so myself) New York’s very own Bianca Del Rio.   The evening will begin at 8pm with a live viewing of the final episode followed by the official crowning of “America’s Next Drag Superstar” and check presentation.   Then the winner and top five drag finalists will perform live, lip-syncing their way back into our hearts.

“It’s your last chance to see all your favorite girls from RuPaul’s Drag Race’s Season Seven together on one stage,” say Brandon Voss of Voss Events, the company producing the event.  After the coronation, New York drag legend Lady Bunny will be on hand as the in house DJ and keep the party going all night long.

So whether you are rooting for the fierce fashions of Violet, the campy humor of Katya and Ginger, the little engine that could Pearl or the best Snatch Game impersonator this year Kennedy, chances are you will have a fun time and really find out who will win this race and continue on in the tradition of making this the best damn reality show on television.

Previously, Miss Fame went home. I’m going to miss her, even if some of you heartless bitches aren’t. END_OF_DOCUMENT_TOKEN_TO_BE_REPLACED

Trixie Mattel’s back!!!! I’m so excited!!! Of course, this is reality TV, so … there’s that. END_OF_DOCUMENT_TOKEN_TO_BE_REPLACED

*yawn* Greetings Race Queens! You might have noticed that there was no recap last week. Well, yours truly fell asleep during the episode and didn’t wake up until the Snatch Game started, so apologies all around. END_OF_DOCUMENT_TOKEN_TO_BE_REPLACED

Previously, the dolls had to make stupid parody videos and RuPaul got upset when they made fun of Drag U. Trixie Mattel went home and I’m currently writing this from jail, as I BURNED THIS MOTHERFUCKER TO THE GROUND! END_OF_DOCUMENT_TOKEN_TO_BE_REPLACED

Last week, Jasmine Masters went home. Afterwards, everyone talks about how it’s sooo quiet backstage and NOW Miss Fame speaks up about how she hated the pop the corns joke. Everyone takes their beards off. Insert Aaron Schlock joke here. END_OF_DOCUMENT_TOKEN_TO_BE_REPLACED

Previously on Drag Race, the gods made us birds, so we could fly. Fly far far away.  Apparently, it didn’t work because we’re back, only Sasha Belle isn’t!! END_OF_DOCUMENT_TOKEN_TO_BE_REPLACED

Previously, the queens all got naked! Along with the pit crew. Tempest Du Jour left, and since no one has mentioned Mrs. Kasha Davis’ age, it looks like we won’t have to deal with “OMG!! You’re soooooooo old!!” comments anymore! END_OF_DOCUMENT_TOKEN_TO_BE_REPLACED

RuPaul’s Drag Race Season 7 hunty!!! Are you ready? Did you meet the queens and watch all the fucking promo videos?! You did?!!! I’m amazed! Let’s dive right in! END_OF_DOCUMENT_TOKEN_TO_BE_REPLACED